Is it possible that the FBI can lock my phone after downloading an app by mistake?

“FBI” holds your phone for ransom – How to remove it?

“I was watching porn on the internet (I knew it was bad), and then something was installed on my phone. My phone is completely locked now, all it does is to stay on an FBI pop up screen saying how I am begin accused of viewing child pornography. It wants me to pay 500$ or they will send something to all of my contacts, and they took a picture with my camera! I have tried to reboot my phone and all it does is give me a few seconds before it pops back up. I am very scared. Is the message really from FBI? I don’t know what to do! How do I get rid of it to unlock my phone? Do I really need to pay the fine?”

FBI Virus is nasty malware that has been reported repeatedly over the past few years. It targets mobile users by installing malicious application which freezes a cell phone or tablet, holds it as ransom, and then demands the user to pay as much as $500 to unlock it. Also it can use javascript to hijack the Internet browser and prevent users from getting online until a fine is paid in 48 or 72 hours. At the first sight the virus looks like a legitimate warning from the FBI, it shocks people because it has FBI logo and seal on the top. Also it lists user’s IP address, location, user name as well as device information on its page. The malware locks down a cell phone or a tablet in the name of the FBI with a big warning titled with “Your phone (Internet) has been blocked for safety reasons”. It falsely states that you have been violating Copyright and Related Rights Law. You may have visited some illegal articles, pornographic websites, online videos or music. In the end of the warning it says you have to pay $500 fine with Paypal MyCash card within the next 72 hours after the infringement. It gives you a countdown telling you the remaining time to pay the fine. The 72 hours countdown keeps going and it definitely causes hypertension for victims who get infected by FBI virus. But actually this is a fake message created by cyber hackers and it has no affiliation to the federal government. FBI will not hack your mobile device in any cases. So you don’t have to pay the fine at all. Sending the fine to this fake FBI warning will not help you unlock your device. It is just an  illegal way used by hackers to collect money from innocent users. Government institutions will come to your house without noticing you if you really break the laws. It won’t lock people’s device and show any messages like this for just asking a small fine through a prepaid card. Don’t be a victim to pay the ransom fine. If your phone or tablet has been blocked by FBI warning, you are recommended to consult an expert to get rid of it manually. 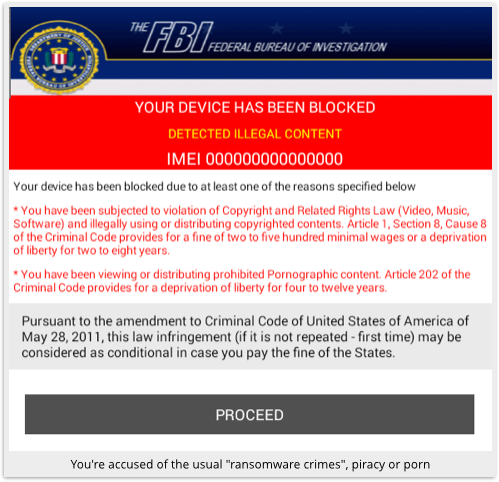 Why your phone has been locked by “FBI”?

Mobile devices have become more critical to the everyday lives of average people, thus cyber hackers are creating more and more malicious software aiming to target mobile users and extort money from that. Those malware can be installed on android device (such as Samsung, HTC, LG, Motorola and Sony phone) and Apple device (iPad, iPod, iPhone) without asking for any permission. Once installed, it pops up immediately and freezes your screen. You won’t be able to call or text. You cannot get to settings to uninstall the malicious apps. What’s more, if you power off the phone and turn it back on the FBI message comes back right away and won’t go away itself.  Many users are scared and worried about being caught by the police or FBI when the first time they see FBI warning on their device. They also concern their privacy will be hacked and they are afraid getting device blocked forever too. Some of them may even submit the penalty and pay the fine immediately without thinking twice. As a consequence, they just lose the money without getting the device unlocked.

One thing all people should know is that your phone is not blocked by the “FBI”.  This is merely a trick designed by hackers to scare people into paying the non-existent fine. FBI Virus usually disguises as an innocent-looking mobile app called Video Player or other names , with a clear aim to trick unwary users to download it on their smartphones or tablets. As soon as you install this fake app, the virus will be activated on your android devices immediately, taking over your infected device and won’t let you do anything on it. It also can be installed by clicking malicious links or unsafe advertising pop-ups, visiting pornographic website or downloading attachment from spam emails.

How to avoid FBI Scam in the future?

Since viruses are quite inevitable, there are some tips you can avoid being fallen into FBI Scam in the future:
1. Be careful of downloading applications in the internet because many of them are just cloned applications. Visit legitimate app stores like Google Store because it filters out the reliable application from what’s not reliable.  Don’t try to download free apps from third-party websites. Most viruses are bundled with those unreliable apps.

4. Be careful while you are connecting to a pubic Wifi connection. Do not do any online banking unless you are using a private Wifi with password protected.

5. Read the permissions before you install every apps you install. Don’t just click OK without reading what the apps will do.

How to unlock mobile device from fake FBI warning?

If your phone has been blocked by the FBI scam, you will find it difficult to exit the virus page. You are not allowed to power off the device, nor close the virus alert page. to exit it. The virus prevents you from doing any actions on the phone. Some users suppose that a security apps will help you get rid of the virus and protect them against further attacks. In fact, antivirus is not capable to pick up any this kind of malware at all. Therefore, manual removal is considered to be the best choice to remove FBI virus from the device.

Suggestion: Manual removal is a skillful and risky job, any mistake will lead damage to your phone or tablet. If you are not sure how to delete this FBI virus, please contact YooCare PC experts 24/7 online for help right now.