My android phone is blocked by a message stating it is from United States Courts. It states that I did illegal activities and asks me to pay $300 within 48 hours if I want to unlock my phone. Is it real or just a scam? Is there a useful way to bypass the warning screen safely and permanently? It is so annoying to let it stay in my phone, and I can’t do anything with my phone. Now don’t worry, you can unlock your phone by following the guides below.

The United States Courts Virus is classified as a ransomware that is able to lock the users’ phones. The attackers land their eyes on the phones as mobile phone market is growing bigger and bigger. And the virus has been widely spreading out on the internet nowadays. It is a variant of FBI scam virus or Department Of Justice virus. It disguises itself coming from the United States Courts and accuses the user of being involved in illegal phone activities. In fact, no law authority would publish a person by locking his or her phone, and they will not make any accusation online. It is designed deliberately by cyber criminals whose aim is to scam as much as money from unwary users. The warning message tricks the victims to enter a payment for $300 in order to get the phone work normally. The only means to finish the payment is by transferring money electronically via Greendot MoneyPak card. The ransomware also threatens to take additional fines and legal troubles will happen to you if the fine is not paid immediately. Even though this kind of ransomware is quiet common, there are still many phone users who are fooled by the scam and the hackers gain profit from these inappropriate behaviors. It’s not so difficult to distinguish a ransomware from a legitimate warning message once you’ve learned about characters of the United States Courts Virus and other similar versions.

The United States Courts Virus scam can intrude into a phone by involving with opening an email attachment that contains the virus or clicking on a link that has the virus included in illegal apps and watching child porn and other pornographic content online etc. Phone users who haven’t behaved well online will be easily taken in by this malware when they see the warning message mixing the false with genuine. The warning screen displays elaborately the reasons of your phone being locked which are mostly about violating certain laws and rules of the States. The hackers achieve their evil goals by getting numerous people to download free software, video, or music files which be bundled with the virus. Users may visit those suspicious websites without thinking about malicious attacks. And once the phone is infected by the virus, it accuses users of violating the law by downloading the files without their knowledge. Another way that you get the phone infected is by opening the attachments of email spam that are sent to millions of users every day. The United States Courts virus is secretly embedded within the attachments. These emails will contain an alluring message, and the user will quickly open the attachment Out of curiosity to see what it is on earth. In this way the phone can easily become the target of the hackers.If your phone is infected by the virus unfortunately, please take the manual method below to unlock it.

1. Your mobile phone will under its control rapidly once it is downloaded.
2. It may damage the Android system.
3. It is not allowed to change phone settings or to download antivirus program.
4. It will ask for a ransom to unlock the phone.
5. You can’t open other applications.
5. It is a big threat to your phone security and your personal information. 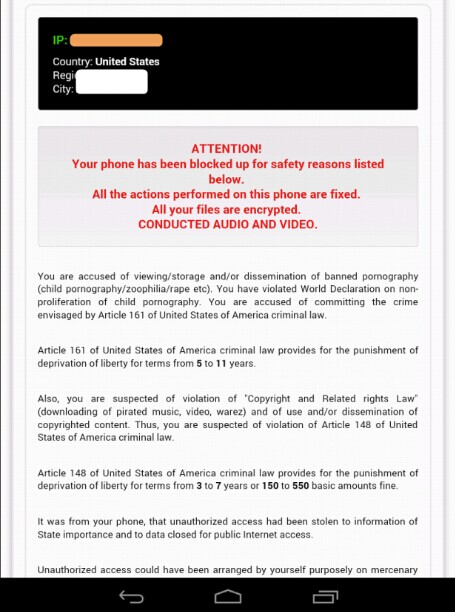 Note: When you reboot your phone into Safe Mode, your Android device temporarily disables all third-party apps that you’ve installed on it and lets you analyze the cause.

Safe Mode On Samsung Galaxy S4:
1.Turn off the device. 2. Press the power button to turn it on. 3. When the screen turns up keep tapping the soft Menu key that is left to the Home button till the device boots up. 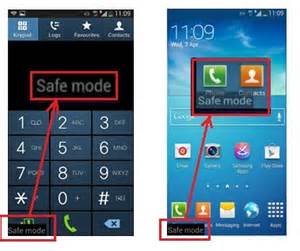 A lot of phone users are fooled by the United States Courts Virus since on one hand it looks very real and on another hand they may be shocked with a guilty conscience. The warning message convinces phone users that the phone is locked because they have violated certain laws by not behaving well online, so they need to pay the fine in order to unlock the phone. The locking screen contains the US government symbol and your personal information including IP address and location. As the United States Courts Virus has completely locked your phone, you are not able to use any antivirus program to deal with it. In this situation, stay calm and try to remove the United States Courts Virus from android phone manually as soon as possible. The good news is you can follow some basic steps above to get rid of the virus.

Note: Manual removal needs sufficient professional skills. If you haven’t enough expert skills, you may make some mistakes damaging your phone immediately. If you are not sure how to do, please contact YooCare PC experts 24/7 online for help.