Win 7 Defender 2013 is regarded as a rogue program that poses a huge risk for an infected machine because of its fraudulent expectation is to steal unaware users’ money. Don’t be taken in. Users should take action to uninstall this fake antivirus program immediately.

Win 7 Defender 2013 is one of the members of the nasty Rogue family as same as Vista Defender 2013 and XP defender 2013. This horrible fake anti-virus spyware aims to trick computer victims to purchase its products in order to steal money from the victims. The interface of the fake program is just similar to the real anti-virus program. However, it is lacking in legitimate anti-malware functionality and it is an actual danger to your computer’s security.

This fake antivirus program gets inside your system with a help of Trojans. When it is on board, it shows lots of fake messages every time when a computer is turned on. The alerts include: “Beware! Spyware infection was found. Your system security is at risk. Private information may get stolen, and your PC activity may get monitored. Click for an anti-spyware scan.” or “System hacked! Unknown programs is scanning your system registry right now! Identity theft detected!” It is obvious that all the messages are fake. This nasty virus does not allow running all executable files. That is to say, you can’t run any programs after being infected including your current antivirus program. Win 7 Defender 2013 uses a fake scanner, fake pop up messages and other security notifications in order to trick computer users into thinking that their systems are badly infected and it claims the full version can help you cure all these issues. In reality, it won’t help you to remove any virus or Trojan on your PC while causing more damage on your PC for it is a deceptive virus actually. Users must remove this useless program as early as possible.

Screenshots of this rogue program

a. You will get many fake alerts showing you that your computer is in danger as the following picture shows. This tricky virus displays lots of misleading popup alert messages and fake system scan results to scare users and push them to register and buy its useless software. 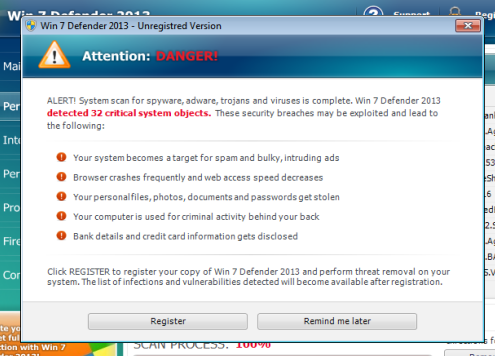 b. Win 7 Defender 2013 will tell you that your computer is infected with various threats, asking you to purchase its full version in order to remove all the infections. However, all the threats it detects don’t exist at all. It is no reason should you purchase this useless product. 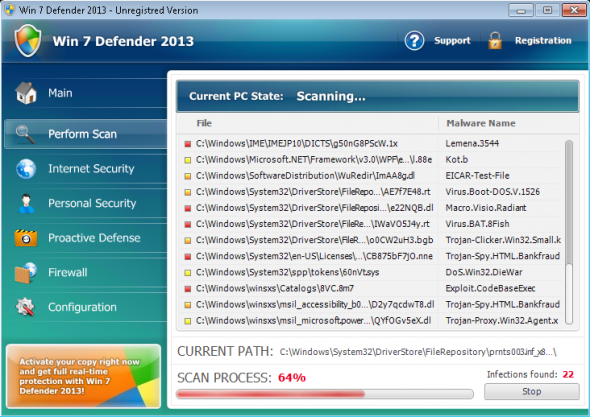 Win 7 Defender 2013 is considered as a virus with huge risk. It gets inside the system with a help of Trojans. As soon as it infects PC, this rogue makes changes in Registry so that it can launch automatically on each system boot. You will get constant pop up messages and security alerts that interrupt your daily work totally. By acting like this, the dangerous rogue program can entice you to submit a payment. Usually this virus gets installed on a user’s computer by using Trojan viruses that get downloaded from malicious websites. It will block any legitimate security programs already installed on the system which may lead to its removal. Any delay in removing the virus completely will increase more risk of system failure. If your PC is infected by this virus, it is suggested to manually remove it so that the virus can be totally gone from your PC and it won’t come back to bother your PC again.