Hey. I am leaving for China in a month. I have been told that Twitter is blocked there, but I really need it to contact home. Almost all of my family and friends use Twitter. It is awful for not being able to use Twitter. I will bring my android phone and tablet with me. One of my friends told that I could use VPN to bypass the censorship. I would like to know how to use Android VPN to access Twitter in China. Please help. Thanks.

Twitter is one of the most popular social media platforms where users communicate and stay connected through the exchange of quick, frequent messages. Users can post Tweets that contain photos, videos, links and up to 140 characters of text. That connects people’s lives together though they don’t live close to each other. They share interesting things in daily life, amazing things during vacation, different life styles in different places and useful links to learn new stuff. No matter where you are, you can contact your friends and share meaningful moment instantly. This is the reason why Twitter is widely used throughout the world.
However, you can’t access Twitter easily in China. It is because the Great Firewall of China has blocked Twitter. A Twitter user retweeted a comment about International affair which was considered as bad to government and people of China. That user was sentenced to 1 year in a labor camp and Twitter was blocked in China for this matter. They believe that social media platform is the place where rumors and unreal statements can spread rapidly and widely without control. Many similar services and websites have been blocked. Like the Chinese authority state, they block those services and websites protect national sovereignty, security and development interests. When you are trying to access the blocked websites in China, your government, ISP and national firewall will block your connection immediately once your Chinese IP is detected.

Though Twitter is blocked in China, it has lots of Chinese users. It is very inconvenient for not being allowed to use Twitter. Users need Twitter to connect themselves to others. People travel to China and Chinses people visit others countries. They need the same social media to communicate. How can they bypass the strict censorship and overcome the powerful firewall? Most of the users use Android VPN to access Twitter in China. Due to the strict Internet censorship, VPN is widely used. You will be able to fake your real IP which show who and where you are. In others’ eyes, you are not located in China and they have no idea who you really are. You have new ID on the Internet.
What is a VPN? VPN stands for Virtual Private Network. It creates an encrypted and secure connection between you and the website you are visiting. The VPN server plays the role of a middleman between you and the website that you are visiting. Given that the network traffic between you and websites is encrypted like a tunnel, the ISP will have no idea of your traffic emerges without signs of who you are or where you’re connecting from. The VPN server provides new IPs to replace your real IP. With the help of Android VPN, you will be able to use Twitter any time when traveling in China with your Android mobile devices.

How to Set UP Android VPN to Access Twitter in China?
To use Twitter in China, you need to set up Android VPN correctly. All you need is make a few simple steps:
1. Tap Settings
2. Select Wireless & Networks and tap on VPN
3. Add VPN Network
4. Input connection name, select the type of your VPN connection and input VPN server address from your account data.
5. Input your Username and password that you received from VPN account service in e-mail.
6. Save it and tap Connect
For connection to VPN server:
1. Select Home > Menu > Settings
2. Tap Wireless & networks
3. Tap VPN settings
The VPN connections you have added are present in the list. Select the VPN you wish to connect to. A dialog box will open asking for your credentials, enter them and click connect
When you are connected to VPN, you will see an ongoing notification in the Status bar on your Android device. If you are disconnected, you will receive a notification and an option to go back to the VPN settings section.
Notes:
1. Always choose the server that is near China so that one can get the fastest possible results.
2. These VPNs are not free of cost hence ready to pay some affordable price to get the access to the Telegram and other blocked websites.
3. Moreover, never search or do something that can be offensive to Chinese authorities something traceable by GFW.

If you have any questions about how to use Android VPN to access Twitter in China, please live chat with YooCare Expert now.

How VPN works while you are trying to access a website?
In order to let you know the functions of VPN, let’s talk about how it works in detail. You run VPN and click on link you want to visit. The browser sends encrypted your account & password and request to your VPN service first. Then, VPN service decrypts the communication and sends it to the targeted website. After the website receives data, it generates session cookie and send it to your VPN service. VPN encrypts the session data it received and then sends it back to your device. In this way, you can view the website you like after your browser received the session cookie. You may think that the process is too complicated and it will take a long time before you can access the targeted website. In fact, everything we mentioned above happens at an amazing and unbelievable speed. In the blink of an eye your request will be sent and everything will respond. Your Internet connection is secure, encrypted and extremely fast with VPN service.

Problems that you may meet while using VPN service
Problem 1: I can connection VPN service via 4G mobile data on my phone, but I can’t connect it via WiFi hotspot? I saw WIFi signal bar there while it still used my mobile data.
The problem may be that WiFi hotspot sets limits on VPN connection. NAT of VPN, namely PPTP/L2TP has been limited. WiFi hotspot refuses to transfer your data to the VPN service.
Problem 2: I failed to visit some regular websites after I turned off VPN. I could access those websites before I first used VPN. I am a Chinese user and I use VPN service to access Google, Tinder, OneDrive,Dropbox, Vimeo, Facebook, Twitter and watch Youtube. Now, I can’t visit my favorite Chinese websites in a normal way. I have to run VPN so that I can access them.
Firstly, there may be something wrong with your routing tables. Check your default route and VPN gateway.
Secondly, your DNS may have been hijacked. Check your DNS and scan your computer for malicious programs
Thirdly, it may be the mechanism network problem or Internet proxy. Check your Internet settings.
Fourthly, it may be caused by non-normal exit. Next time, remember quit it in a normal way.
Problem 3: I can’t access local area network after I connect to VPN.
It may be caused by IP address conflict. Check your network line and correct the settings. Find your original gateway address via command.
Problems 4: Why I have blue screen after I run VPN?
Probably, your drive is not compatible with the VPN service you use. Besides, some anti-virus programs, game protection drive and bank security controls will bring blue screen when you use VPN.

NO.1: ExpressVPN
ExpressVPN offers a world-leading service for mobile devices and computers. It has been voted as the best VPN for Windows due to its impressive speed and excellent encryption. Though it is powerful, it is pretty simple to use. You can follow easy guides to set up ExpressVPN on your devices no matter it is a computer, tablet or phone. Once you use ExpressVPN, it encrypts your network connection, protecting your real IP address and data you share with your partners. Besides, you can watch videos on Youtube or other videos from anywhere at an amazing speed. It definitely is worth the money. 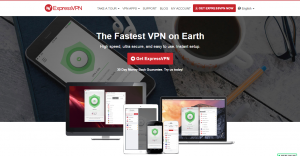 NO.2: VyprVPN. VyprVPN connection is one of the fastest VPN service with its outstanding infrastructure. It unlocks your favorite websites, such as OneDrive, Twitter or google websites and bypasses the Great Firewall easily. You can enjoy your browsing activities without restriction. Wall-escaping is its most obvious character. It will protect you against China’s cybersecurity laws. However, please keep in mind that it is illegal to post or watch child porn on the Internet in many countries. You may violate the international laws with improper actions. Do not use it to do illegal things. In addition, VyprVPN works for Windows, Mac, Android and your router. One of its disadvantages is that it does not accept Bitcoin.

NO.3: NordVPN. It helps you get instant access to OneDrive, Hulu, Netflix, BBC, ITV, Sky, RaiTV and other websites that are not available for users in China. NordVPN also unlock some social websites and share legit resources freely and securely. You can enjoy amazing videos on Youtube and post interesting things on Facebook and Twitter. Besides, you can check your bank accounts or other confidential information without worrying about information leak and cyber hack at public hotspots when using NordVPN. No one can spy on your meetings with your trade partners. Your communications are highly encrypted.

It is a fact that Twitter is blocked by the Great Firewall of China. Many users are stopped outside the door of Twitter to connect to the world. Luckily, people develop VPN, a useful tool, to unblock the banned websites and services. Once connected to Android VPN, you can access Twitter freely with the help of VPN server. You can select IP of a country where Twitter is available. When you select local server of US, for others, you are located in US. Your ISP, government and the firewall have no reason to block your connection to Twitter. Android VPN not only helps you unblock Twitter in China, but also protects your privacy on the Internet. People do banking and other important business over their cellular connection when using a mobile device. Most of them travel and spend time in airport, hotel and other public place a lot. They usually use public Wifi. Hackers can steal your online information by intercepting your session when using the same network. That puts your precious information at risk. It is necessary to use a VPN to encrypt your online connection. Some of you may wonder if it is legal to use Twitter and VPN in China. After all, someone was sentenced to 1 year in a labor camp. We can tell you that it is legal to use both Twitter and VPN in China. People need to connect to each other with the development of globalization. As long as you don’t tweet aggressive and unreal statement about Chinese government, it is legal to use Twitter in China and your connection will not be blocked with the help of Android VPN. Get an Android VPN,Twitter will be available for you in China.

Kindly Reminder: If you have any question regarding how to use Android VPN to access Twitter in China and how to Set up VPN on your device, please live chat with YooCare online expert for help.