I was on safari for my iPhone and then I got a message that is locking me out of safari from the FBI saying that I have been accused of looking up child porn and all these other things that I did not look up on the internet and they are expecting me to pay a $500 fine. I am being accused looking up illegal porn and now they are saying that if I don’t pay them in the next 3 days they are going to block my apple id and delete everything I have on my phone and lock me out of it. I was freaking out. So I went to my local CVS about 15 minutes later and got a PayPal My Cash card and put $500 on it. I entered in the pin of the card and my screen said something along the lines of “YOUR PAYMENT WILL BE PROCESSED IN THE NEXT 24 HOURS” So, today around the same time I anxiously went to turn my phone on and the problem had not been solved. My Internet was still blocked and stuck at the same screen. Is that a scam? How do I get my money back and remove this Apple ID blocked scam from my iPhone 6s?

If you got a pop-up message saying that your Apple ID or your iPhone is blocked and you are asked to pay $500 fine within 24/48/72 hours to unlock the device, then you must suffer with the Apple ID Blocked Scam now. This is a common malware used to target Apple users in United Kingdom, United States, Canada, Australia, Italy, Germany and others countries so don’t fall for it. It is known as another variant of FBI Virus that also utilizes JavaScript to hijack internet browsers such as Safari and Chrome on Mac OS X. This type of scam actually has been running for a few years and certainly isn’t new. But it’s still going on and it can get installed and pop up to block user’s access to the Internet without any permission.

Apple ID Blocked Scam masquerades as a legitimate warning from government department such as FBI, AFP, Mandiant USA Cyber Security, Cyber Police and blocks you from accessing Internet whenever you are on Safari or Chrome browser. On the blocked page it alleges that your iphone or ipad has been blocked due to the reason that you have been violating Copyright and related laws, viewing or distributing prohibited pornography and others similar crimes. You will be asked to pay a fine of $500 via Paypal My Cash Card in 72 hours or you will have criminal charges placed on you and all your illegal activities will be sent to your contacts. Furthermore, it will block your Apple ID forever and all your photos, music, games, documents stored on the device will be deleted. Hackers created this virus aiming at robbing money as much as possible from timid people who has a guilty conscience. They use scare tactic to make victims pay the fine so they can gain profit from that. Actually the warning has nothing to do with any legitimate authorities. Although paying that fine may look like the only solution to get Safari working again, unfortunately it only gets things worse. Even the payment has been sent, you will get nothing changed. You are still blocked by this nasty scam. 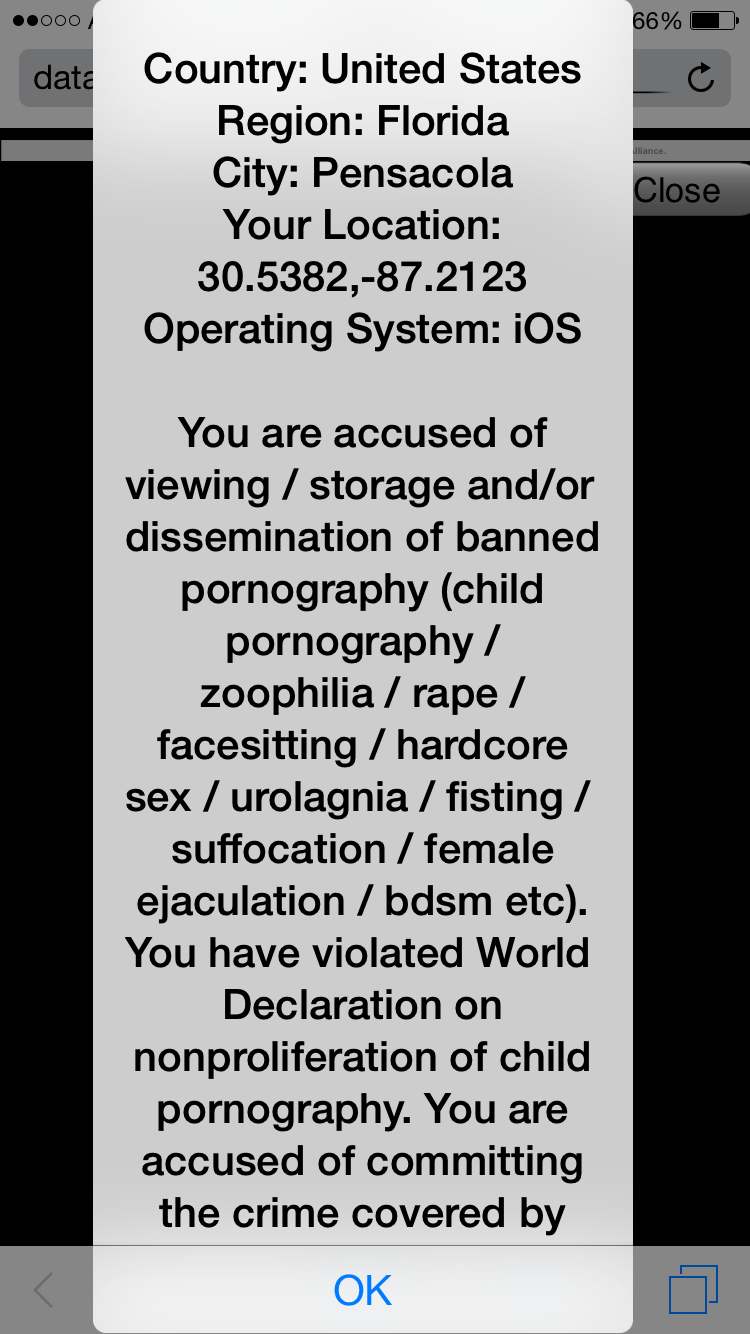 It’s still unknown what makes this Apple ID Blocked Scam so successful because there are thousands of people all around the world who have already paid this fine. Many of them pay for the fine because of fear. But $500 fine is not the only benefit that this malware wants from its victims, this malware invades your system with the help of Trojans which may open backdoors for hackers to control your system. Via this nasty threat, the hackers are able to steal your important private information such as user name, password, credit card number, banking information, business secrets, etc. Therefore, Apple ID Blocked Virus must be kicked off completely and permanently from your iPhone, iPad or iPod as soon as possible before it can bring further damages to the system.

How do I Get Apple ID Blocked Scam on iPhone/iPad?

We used to think that Apple iOS gadgets were pretty immune to viruses and malware. Sadly, over the past year hackers have turned their attention to our mobile gear. Usually, the installation of Apple ID Blocked Scam Virus can be completed in a short time and then it pops up immediately to lock your iphone or ipad without signs if you visit a phishing site, open a junk e-mail attachment, click on an unknown link or download an application from an unsafe source. You will be easily get infected by this virus after you jailbreak your device.

It will block your Internet access once it is downloaded.
It will pretend itself as a legitimate warning to lock you out of Safari or Chrome browser.
It will not let you exit the blocked page even you have restarted the device a million times.
It can block all types of antivirus apps.

Important Things You Have To Know If Your Safari Has Been Blocked by Apple ID Blocked Scam That Asks for $500 Fine:

1. This message can run on iPhone, iPad, iPod or other Apple devices.
2. Don’t pay for anything or provide your personal information to this hoax, it won’t help unlock Safari/Chrome, but just waste your money.
3. Currently antivirus apps are unable to detect or remove this malware.
4. There is no anti-malware software that can detect 100% of the malware out there.

How to Prevent Your Apple Devices from Apple ID Phishing Scam Like This?

Since viruses are quite inevitable, there are some tips you can avoid being fallen into Apple ID Blocked Scam in the future:
1. Be careful of downloading applications in the internet because many of them are just cloned applications. Visit legitimate app stores like Apple Store because it filters out the reliable application from what’s not reliable. Most viruses are from gaming and anti-virus applications which are forged. Before downloading an application, try to read some customer reviews so that you will be assured that it is truly a trusted app. Stick with apps from App Store and don’t jailbreak your device and install apps from third-parties.

Apple ID Blocked Scam virus uses javascript to block user’s Internet access and prevent them from going online properly. It uses scare tactic to deceive people into paying the ransom without unblocking their device. Obviously it is a hoax. The virus rapidly spreads over the Internet and has infected thousands of devices at an alarming rate. There is no anti-malware apps that can delete the virus automatically. Worse still it won’t go away unless you have removed all its components step by step. Even in some cases it may disappear itself for a while to let you get Internet access back, but your device is still unsafe. It is still a threat for your privacy. To completely get this off iPhone or iPad, you can contact YooCare PC experts 24/7 online for help right now.