My safari has being blocked by AFP data://(null) virus ransomware on apple iPhone coming up with paysafecard voucher. This pop up comes up saying that I have being doing illegal activity and I need to pay a fine. It doesn’t let me access the Internet until I pay the fine of $200 AUD thru paysafecard. Is watching porn on my iphone legal? When you got message to say device blocked as accused of watching illegal sites, like you got a message on iphone saying phone has been blocked and need to paysafe card of €100, What can i do? How to remove paysafecard voucher scams remove from iPhone/iPad?

Data://(null) Virus is a Ransomware that can lock your mobile device asking for a fine from $200 to $500 thru green point card, paypal, paysafecard or ukash. This type of Ransomware starts damaging android phone, tablet and iOS devices (iPhone, iPad and iPod) recently. This malware spreads from America to Canada, Australia, New Zealand United kingdom, Germany, Ireland, France, Italy, Netherlands, Spain, Norway, Switzerland, Sweden, Belgium, Denmark, Greece and other Europe countries. Once blocked your mobile device, you are requested to pay a fine of $200 within 24 hours through Paypal, Moneypak, Moneygram, Ukash or Paysafecard which you can purchase from Kmart, CVS, Walmart, or Walgreens:

Data://(null) Virus can attack users in USA with the FBI warning on their iphones or iPads and they are unable to use the internet on their mobile device like iphones or ipads, It is telling them to head out to a local rite aid or walgreens to purchase a paypal cash card, if you are based in Australia, you will get AFP Data://(null) Virus hoax that asks for $200 paysafecard, but the warning is not real. Scammers are either after confidential information or money. Any message on your phone or computer that leads you to share personal, financial or private information, or asks you to pay a fine, back taxes, fee, etc. has the probability of being a scam attack. This virus cell phone attack may have different forms and can be altered using different names, logo and intimidation tactics to get more and more people to fall for it.

Before transferring money online after receiving unsolicited messages such as the FBI message, AFP warning or Metropolitan Police Ukash Virus warning, you should spend some time researching for the latest viruses, malware and scams. If it’s fake, thousands others would have received the same message.

Please Contact YooCare 24/7 Online PC Expert now if you don’t know how to start Data://(null) Virus removal on your iphone or ipad. 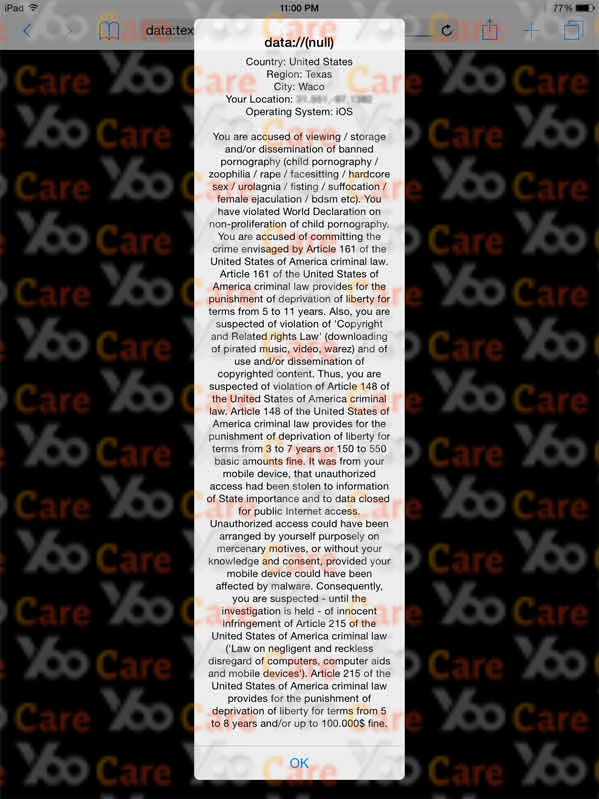 Why Data://(null) Virus Got On My iPhone/iPad?

I think someone hacked into my phone, because a virus was installed on my iphone. It installed a pornographic app without me knowing and made itself a “Device Administrative App” (from what I remember) so I was unable to uninstall it. Something really scary happens next, when I try to uninstall it, an information page pops up from the US Police Data://(null) as i am in USA, and it says that I am charged of viewing child pornography and stuff, even though I have never before! I am so scared because it says I could go to jail. I was able to end the app and make it stop working while I made it not a “Device Administrative App” and I uninstalled the app. I am so scared though because it had my phone number and an IP Address. One thing about it that was fishy was that it listed my “Cellurar Network”; Cellular spelt as “Cellurar”. I do not think that a government page would have a spelling error such as that. Please respond back to me as soon as possible to help me because I almost fainted when I saw all this on my phone.
This Trojan attack can happen in three ways:

Important Things You Have To Know If Your Safari Has Been Blocked by Data Null Message:

1. Data://(null) virus spam can run on iPhone, iPad, iPod or other Apple devices.
2. Don’t pay for anything or provide your personal information to this hoax, it won’t help unlock Safari/Chrome, but just waste your money.
3. Currently antivirus apps are unable to detect or remove this malware.
4. No apps can prevent the virus from attacking Apple devices.

The details that will help you to spot a potential FBI or AFP Data://(null) Virus mobile device scam are:

1.You will find that this virus uses the following law enforcement agencies –

2. There will always be a threat to intimidate you to pay up. It can be legal action, imprisonment, criminal charges. Expect the scammers to come up with newer ways to scam when their old ways become known. They will change the details, but they will essentially play on your fear to transfer money to them.

3. There will either be link(s) in a scamming effort or a direct requirement to transfer cash. Any such message will lead you to act.

How to Remove and Prevent Your Apple Devices from Data://(null) Message?

First, you need to get on airplane mode.
Next, remove the weird app related to the virus.
And clean all virus from your iPhone/iPad, if you don’t know what to do, you are recommended to contact an online expert from YooCare.

Since viruses are quite inevitable, there are some tips you can avoid being infected with Data://(null) virus pop-up in the future:
1. Be careful of downloading applications in the internet because many of them are just cloned applications. Visit legitimate app stores like Apple Store because it filters out the reliable application from what’s not reliable. Most viruses are from gaming and anti-virus applications which are forged. Before downloading an application, try to read some customer reviews so that you will be assured that it is truly a trusted app. Stick with apps from App Store and don’t jailbreak your device and install apps from third-parties.

I was trying to watch porn and my phone is blocked? Just got a pornography warning on my phone telling me my device is locked and i need to pay a fine with paysafecard vouchers? Can’t unlock safari keep getting the same message. Data://(null) virus can block you access the internet on your mobile devices like iPad or iPhone. If you’ve had a message on your mobile phone saying you went on a site but you weren’t meant to go on and it’s asking for money/paysafecard and it’s also saying if you don’t pay in 24h your mobile phone will get blocked and the data you were looking at will be sent to all your contacts, don’t worry, it’s a scam coz you didn’t do anything wrong, the message on your iPhone is not real, and the data can not be sent to your contacts by the virus. But you have to get it off immediately.

To completely get this virus malware off iPhone/iPad, you can contact YooCare PC experts 24/7 online for help right now.