How to Remove FBI Virus From Android Phone/Tablet?

Will FBI popup affect other devices? I got US marshal service pop up – one of the fake FBI virus and I have been reading online that it is a virus. Can you tell me how to remove it from my tablet? My boyfriend’s phone was locked by this FBI virus he successfully got it to safe mode but we are there I need to know our next step I’m sending you my email address because he can’t get to his email. Hi, my phone has been infected with the FBI virus ($500). It locked my screen with a pin number. I read an article earlier. I have it in sleep mode. I I tend to go to settings deactivate or uninstall the download responsible for this virus. The only, sole trouble, is unlocking the screen from the hackers pin number. My tablet is locked and has a pop up blocker from the is marshalls service. I know it’s a scam but need help removing.

I was on my phone and I accidentally clicked on a malicious link, and then now I have a warning from the FBI saying that they had locked my phone due to some sort of violations and I had to pay a $500 fine! I did a little bit of quick research and it says that this is called FBI (Moneypak) virus which is a scam designed to scare people and extort their money. Of course I won’t pay anything on it. And I had already looked up some ways on how to get rid of it on my phone, but the only problem is that I CAN’T LEAVE THE PAGE. It won’t go away so I have no way to access my settings or apps manager to uninstall it, neither can I  go to Google Play to get an anti-virus remover. And My husband failed to do the lock thing and we can’t unlock or turn the phone off unless we take out battery. I’m really scared and I really need a solution fast! How can I remove this FBI virus from my android phone if I can’t even leave the “warning”?

What Does It Mean to Have A Cyber Crime On Your Phone/Tablet? Phone/Tablet Locked By FBI Virus Scam? – An Overall Description

Now the cyber criminals who design the infamous FBI Moneypak Virus scam have turned their eyes on the growing mobile market as smartphones become more critical to the everyday lives of average people. Hackers are spending more and more time creating different versions of their viruses to infiltrate several different mobile operating systems. So this time they have put FBI virus in users’ phones (including iPhone and Android) via many illegal methods which can completely lock the target mobile phones. Most people take it for granted is that Smartphones are safe to use so an increasing number of users now use their smartphones for making e-payments and money transfers, assuming that they are as secure as the bank’s infrastructure. However, the fact is Smartphones are mini computers in themselves and can absolutely become infected with all types of malware. A report from Kaspersky Labs said 98 per cent of mobile malware now targets the Android operating system, so Android phone undoubtedly becomes one of the main targets of the FBI virus. And the android tablet can be attacked by the virus as many users use this mini machine to surf online or play game.

The Ransomware works in the same way as it does on computers. It locks your device and prevents you from doing anything on your mobile phone/tablet as soon as it is downloaded. Once it is running, you will get a big warning  from FBI or other law enforcement agencies like Australian Federal Police, Metropolitan Police, U.S. Department of Justice or PCEU saying that:”Attention! Your phone or your device has been blocked up for safety reasons”. From the fake message, it accuses the computer users have done something illegal, such as downloading or distributing copyrighted material, viewing child pornography or distributing spam and then demands a fine from $100 to $500 via Moneypak or Ukash within 48 hours in order to correct this violation. It locks up the whole page and only gives you a box to let you input the Moneypak code and unlock your device. It is no doubt that no one wants to take risk of being caught by the police, but paying the fine is not an option to get out of this FBI warning you see on the phone because this is not a real message. Instead, it is a hoax designed by cyber criminals who attempt to trick you and swindle your money. FBI virus on phone devices is not easy to remove because it will not let you leave the locked page or even it could block you from turning off your phone/tablet. Each time you power on the phone or tablet, FBI virus will come up immediately.

Usually the crooks are using the time-honored trick of telling you that you need to install a special “video player” app, and then offering it for download. If you download the malicious application, FBI virus scam will be immediately installed on your device. Also you can get FBI virus on your phone/tablet after clicking malicious links. In addition, the hackers may use the compromised email account to send a specially crafted email message with an .apk (Android application package) attachment to everyone in the victim’s contact list, in order to distribute FBI virus on the Internet.

I got FBI virus on my smartphone yesterday, it is SamSung Galaxy S3. Now on my phone, it only shows the FBI page with the headline “Attention! Your phone has been blocked up for safety reasons” and I have no way to get out of this locked page. I just downloaded an unknown video APP and ready to play some movies, then this warning popped up right away, and no matter how hard I tried to press whatever buttons on the phone screen, the FBI warning just won’t go away. I felt nervous when it told me I need to pay $300 MoneyPak as soon as possible, I don’t know how to do at that moment. I thought something bad might happen to me, so I did what it asked me to do, I paid for the money, guess what? The FBI thing was still on the phone, no way to get rid of it. Help!!!!

From mentioned above, FBI Virus is the most frustrating malware that annoys Android users recently and it should be removed as soon as possible. Users should know that when facing to various malware and viruses, Android phone is no longer safe anymore. Since the most common way for FBI virus to access users’ devices is from third-party apps, we suggest users not allow installation of apps from unknown sources enabled in your Android security settings. The safest bet is to stick with downloading well-known apps from well-known apps from reputable markets like Google Play in addition to having a security app. Also don’t spend any money on this FBI Ransomware, you have to get rid of it quickly in  order to keep the data in your phone safe and secure. 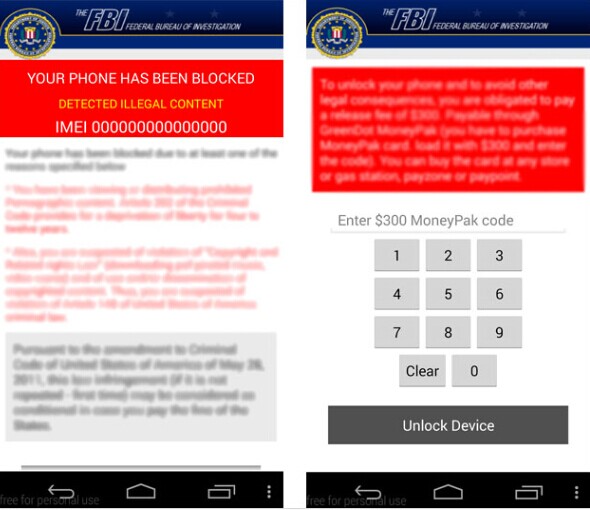 It will take control of your mobile phone or tablet rapidly once it is downloaded.
It will pretend itself as a legit warning and then ask for a ransom.
It will not allow you to change your phone/tablet settings or open Google Play to download antivirus program.
It will not let you power off the phone/tablet or do anything else except for inputting the demand Moneypak code.
It may damage your computer data and the Android system.

Important Things You Have To Know If Your Android Phone/Tablet Has Been Blocked:

1. FBI virus can attack smartphones or tablets running with  Android or Mac OS X system.
2. Don’t pay for anything or provide your personal information to this hoax, it won’t help lock out of the fake FBI virus warning but just waste your money.
3. Currently no APP is able to detect or remove this malware, even for preventing the virus from attacking the computer again.

Although this virus page seems to be legitimate, it is 100% fake. It even uses web cam control to make users panic and make them to pay for the ransom wrongly. If your computer is infected, your camera may turn on automatically. It makes you into thinking your picture has been taken and sent to FBI, or FBI is now watching what you are doing. The fake warning will lock your device forever and block you from doing anything. As mentioned above, we can see how this scam works to deceive innocent users. It is good at using scare tactic to extract money from victims. Hence, users must get rid of FBI Virus from the Android phone as soon as possible.

Note: “Safe Mode” on Phone/tablet starts up without loading any third-party add-ons and different devices have different ways to access safe mode.

For example:
For Samsung Galaxy Tab or Samsung Note: Power it off, and then power it on. During startup and when you see the Samsung Logo screen, press and hold the Volume Down key until you can see safe mode writing below the screen at the left hand angle of the screen.

2.  Once you have put your phone/tablet in safe mode, contact an expert for further removal instruction.

Now as we know that Android smartphones and android tablets are used by tens of thousands of users around the world, those cyber criminals won’t miss this wonderful chance to create all kinds of viruses to infect the phones or tablets in order to reach their evil goals. Their purpose is simple, just scamming as much as money from those infected phone/tablet owners. If your android tablet or Android smartphone is locked, and you get a message on the screen from a law enforcement agency(FBI, Australian Federal Police, Metropolitan Police, U.S. Department of Justice), forcing you to pay a fine and threatening to lock your tablet or your phone forever if you can’t pay it at a limited time. If the terrible situation occurs to you, then your Android tablet/phone is probably infected with a kind of malware namely Trojan:Android/Koler. The virus is widely distributed on the internet. People usually get the virus through downloading and installed a so-called “video player” app. And the virus is secretly hidden in it. Fortunately, FBI Virus doesn’t really scramble any of your data or exfiltrate audio and video as it claims; it merely locks your phone/tablet with a pop-over browser window that quickly reappears if you try to get clear of it. Users have to get rid of it without any delay in case the phone/tablet is completely screwed up.

Note: Manual removal is a skillful and risky job, if any mistakes are made in the process, you may damage your phone/tablet immediately. If you are not sure how to do, please contact YooCare PC experts 24/7 online for help right now.