Help!! Windows Activity Booster fake alert popped up on the screen soon as I turned on my computer this morning. I might get this fake antivirus due to the download of a PDF file from an unknown email attachment yesterday. But why did my antivirus block this rogue and remove it from the contaminated system? Will a new advanced antivirus help me to uninstall this fake program? If not, what shall I do to remove this rogue program from the computer successfully? Any advice will help me a lot.

Windows Activity Booster is defined as a fake antivirus that pops up on the target computer automatically every time the contaminated system starts. It launches an automatic scan through the affected system and displays fake alerts telling users that many risky threats have been found on your computer. It also states that your computer is at great risk and the only way to clean the computer is to purchase its full version of product. Indeed, the fake program looks like licensed antivirus at first sight with its interface which contains quick scan, deep scan and other functions to allow users to view history and change settings as they like. Moreover, the fake scan report supposedly suggests users to update the current trial version to get ultimate protection against various computer threats. However, all pop-up alerts from this trial version of the rogue is definitely fake and false, only to cheat unknown PC users into purchasing its registered editor. It actually obtains same tactics as another rogue program Windows Active HotSpot that collects users’ money illegally and damages the target computer miserably. No matter how real as the fake antivirus seems, PC users should not leave risky fake antivirus but try to uninstall this Windows Activity Booster virus from the computer immediately.

Tricky as the fake antivirus, it pretends to scan the target computer thoroughly and displays scan results claiming that your computer is at great risk, for many malicious threats have been detected on the system and your firewall and other security protections you installed get disabled. It fools users to have those detected threats cleaned by updating the so-called registered version. After getting this fake scan reports, many computer users are scared and worried about the computer safety and go forward to purchase the full version of the fake antivirus without giving it a second thought, in order to clean the computer from those reported threats. Once you sign up and registered for the so-called version, you will find that your hard earned money is paid in vain and your computer is damaged seriously. Neither the trail version nor the registered version of the fake antivirus will help you get full protection and clean all risky threats from your system. It is nothing legitimate or useful but a horrible rogue program that PC users need to have Windows Activity Booster removed completely and promptly.

Furthermore, the fake Windows Activity Booster virus installs and launches itself as a startup process. Soon as the fake antivirus alert pops up on the screen, it makes obstacles for users to carry out computer tasks as usual. This rogue virus corrupts the computer to make it vulnerable for additional threats like malware, spyware and other risky items. When the rogue program attacks the computer, it takes up the CPU usage greatly. The affected computer will be messed up and gets slow system performance and poor network connection as a result. The longer the fake antivirus stays in the computer, the great damages will occur there, including system crash, startup failure, blue screen of death and other unexpected damages. To make it worse, the fake anti-spyware blocks your advanced antivirus to stop it from deleting any computer virus entirely. Therefore, PC users have to deal with the fake antivirus manually at an early time. 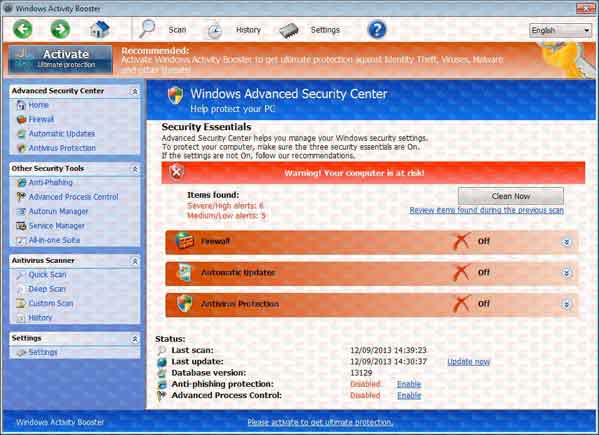 Invasive as the fake Windows Activity Booster virus, it covers most part of the Windows desktop to prevent users from performing operations on the computer. While being affected, the computer is slowed and the network gets disconnected frequently. That is why users get stuck or frozen up when they surf the web, playing games and launching large programs. The fake antivirus launches itself as a startup process and it attacks other executable programs to make them malfunctioning. Particularly, it corrupts your advanced antivirus to make it disabled. Once the advanced anti-virus software gets blocked, it can’t seem to remove the fake anti-spyware entirely, let alone any other potential threat. It also makes no difference if you try another antivirus. When users get stuck at this fake antivirus removal, they are likely to take the computer to a local repair shop or call a technician at door to get the computer fixed. However, PC users will have to wait for several days and spend much money to get the issue fixed. To resolve this mess, PC users are required to remove the fake anti-spyware in a manual way. PC professionals online will help you remove the stubborn fake anti-spyware from the computer completely and safely.

4. Search for all related registry entries infected by Windows Activity Booster virus and wipe them out:

From the above mentioned, we learn that Windows Activity Booster is rogue program designed by cyber criminals to damage the target computer and collect money from users via illegal means. The trial version of the fake anti-spyware pops up on the screen and claims users to update its full version to clean those detected threats. In fact, both the trail version and its full version won’t help you get rid of any computer threat, as it is a risky computer infection itself. It is related to the slow system and poor network, and it is the reason that the affected computer gets freezes at startup, shutdown and program launching processes. The rogue program exploits the system leaks to allow many other threats to invade the computer. Since your advanced antivirus gets disabled by the fake program, then manual removal is considered to be a better choice. If you remove the fake antivirus with no success, please contact YooCare PC experts 24/7 online to help you remove the fake anti-spyware from your computer completely.