I have a virus on my computer that exits all programs and says the file is infected, it just keeps showing my computer is infected with trojan, keylogger, and a whole lot of other stuff. It wants me to buy Antivirus Security Pro 2014 full version and it opens the internet just for you to buy it. Can’t even get to google!! Can anyone help? Thanks a lot in advance.

Viruses and other attacks on the internet are increasing today. Antivirus Security Pro 2014 is a new Rogue program designed by cyber criminals in order to extort money from average computer users. This program pretends to be a reputable antispyware program but in fact it is a completely useless application that will only bring problems for you. Similar to its previous version called Antivirus Security Pro, it infects a computer by exploiting security vulnerabilities and then generates many false results in an effort to panic the user into paying for its worthless software. This fake antivirus program can access the target computer from unknown email, if you click the strange link attached in it or download the attachment contains a virus, your computer can be infected with such malware immediately. Also downloading free applications and movies from the Internet could be dangerous because virus can be disguised as a program to lure users into downloading it. Once downloaded, this virus starts its activities immediately by creating fake security pop-ups, system scans to fill with the whole computer screen while Windows Malware Firewall asks you to spend money on a registration key to remove all the fake threats it detects.

Antivirus Security Pro 2014 is a fake security program, it is good at using scare tactic to cheat the innocent users. It works as same as any other legitimate programs by running a system scan which in a couple of minutes reports about lots of infected items. But actually it contains no ability to remove viruses and protect you from malware or any of the other functions that it markets. If you are careful enough, you will find that the bogus scan just takes so little time as it only imitates looking for infections and later falsifies scan results. The scammer just wants to bamboozle you into spending money on its full version before you realize that these warnings are fake. To make itself seem to be more real and legit, the virus also plays dirty tricks on your computer by blocking you from accessing any programs installed on your computer. As soon as you launch a program, a warning will pop up saying the program is infected and ask you to register the full version first, it also says private data can be stolen by third parties, including credit card details and passwords.. It won’t give you any other options to close the program but just redirect you to a website asking you to fill up your personal information like credit card number, your card holder name etc. This malware refuses to give you access to the computer properly until a ransom is paid. Therefore, if this virus pops up on your screen, don’t consider it as a useful product. This is a dangerous fake antivirus that can ruin your computer and compromise your privacy. A complete removal is needed to save your computer immediately.

Note: If you’re not computer savvy and not sure how to delete this harmful rogue program , please start a live chat with YooCare experts now. 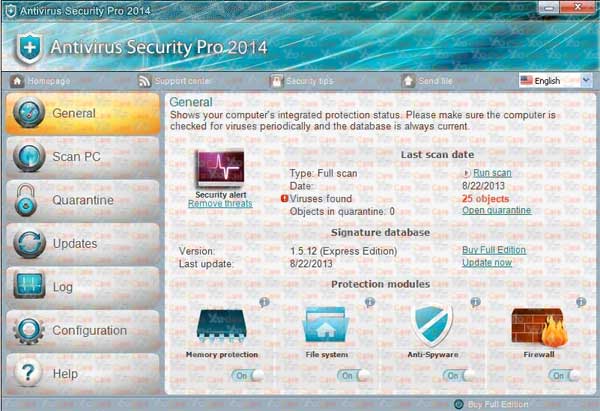 * At the first beginning, Antivirus Security Pro 2014 malware will run a scan automatically when you start Windows, and the results of the scan are always the same. It claims that your computer is heavily infected and compromised by malware and spyware. And if you want to get rid of all these viruses, you only need to purchase the full version. Besides, each time when you try to launch a program, it pops up fake security alert to block you from accessing. Many victims are fooled by it due to its tricky actions, this fake anti-virus can not give you any security at all. You should get rid of this virus as soon as possible.

Does System Restore Work to Remove This Virus?

We kindly remind you that system restore is not a wise choice to remove such rogue program. Many computer users found that after they did a system restore, things are going to be worse. Not only did the computers freeze, but also lose their precious data. Furthermore, the virus may be still in the computer and made chaos secretly. Hence, it is recommended that using the manual approach below to get rid of this malware as soon as possible.

It blocks task manager and registry editor to prevent users from removing it manually.
It may cause browser redirection or even disable internet access as a result.
It displays lots of false positives with annoying pop ups that you couldn’t stop it.
It occupies much of your CPU and opens up new gateways for other malware.
It can bypass the legit security tools and destroy your computer secretly.
It is able to allow remote hacker access the compromised system for illicit purpose.

As mentioned before, this fake anti-virus software can block many executable programs from running. So it’s difficult to proceed the removal processes while being constantly interrupted by the pop-up screen of this Antivirus Security Pro 2014 virus. To temporarily disable this rogue software from popping up, try to put the infected computer into safe modes first.

General manual removal steps will be given in the following to help you get rid of this unwanted software. (expertise will be needed during the process to deal with changeable virus files and registries):

3. Open Registry entries. Find out the malicious files and entries related to Antivirus Security Pro 2014 malware and then delete all.

Antivirus Security Pro 2014 is an annoying virus that categorized as Rogue Program that initiates a bogus system scan with each system start-up and misleads computer users into paying a useless product. It displays various security notifications telling you that computer is infected with Trojan virus, keyloggers etc, which strengthen the feeling that your system is at risk. Inexperienced computer users are more easier to be fooled by paying this malware because it owns a deceitful appearance. The program mainly attacks computers running Windows operating system. It will do everything to get some money from you. If you keep it on your computer for a long time, it can cause unexpected system crashes. More than that, this virus is able to open security holes in the system so other viruses like browser hijacker, Trojan etc. can be downloaded together on your computer. It is suggested users to remove this rogue program without any hesitation.