I recently had Attentive Antivirus Virus on my laptop. It wouldn’t allow me to run any executable, task manager, anything. I’m trying to get rid of it, but it won’t let me open the internet, the virus is blocking it. How can I get rid of this fake antivirus program?

Does Attentive Antivirus Virus Keep Popping Up On Your Computer? What Is It?

Attentive Antivirus Virus is known as a new rogue security program designed by cyber criminals with an aim to collect money from unwary users. This program presents itself as a legitimate tool that can help you remove all the viruses and take care of your computer protection, but in reality it belongs to a computer virus which will not only attack your computer system, but also will steal your money and personal information for illegal purpose as a result. Attentive Antivirus malware is promoted through hacked sites that use exploits to install this program onto your computer without your permission.

Being classified as rogue anti-spyware, this application poses a huge risk for an infected machine because of its fraudulent expectation is to steal innocent users’ money. Once running, it changes your system settings, registry entries in order to perform a bogus system scan on your computer. At that time, your will see numerous pop-up messages on your desktop to inform you many viruses are found on your system and your computer is at risk. According to what this fake security application suggests, it needs users to pay for its full version in order to fix these problems. But you don’t have to do that because Attentive Antivirus Virus is a hoax. The program tries its best to convince you that your system is infected with malware and tempt you into paying the useless product. Therefore, ignore all the false positive generated by this fake program. It will be only a waste of your money since the so called Attentive Antivirus full version does not have any virus database. Furthermore, you will not be able to open anything after computer is infected because this virus affects not only existing programs but also your web browser, therefore you cannot navigate the internet. As mentioned above, we can know Attentive Antivirus Virus is an untrusted program which is used to generate many false results in an effort to panic the user into paying for its worthless software. You should uninstall it manually without any hesitation to make sure your computer is secure and clean.

Don’t have enough skill to deal with this virus? The following instructions require better computer skills to deal with program files and registry entries. If you’re not sure on how to delete this fake antivirus program, you are welcome to contact YooCare 24/7 Online Expert now. 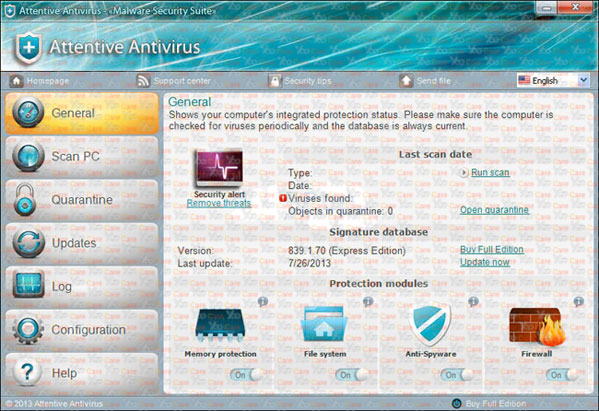 All of the threats mentioned in the scan results are not real and they are not real viruses. The entire purpose of the Attentive Antivirus Virus is to trick the user into purchasing the so called full version as well as handing over the credit card details to the hackers. Since it modifies the system settings in Windows, every time the user attempts to open a program it will be blocked and it will display the following notification stating that the file is infected:

Please ignore all the fake message and take an immediate measure to get rid of Attentive Antivirus Virus as soon as possible.

How Does Attentive Antivirus Virus Get Inside Your Computer?

3. Open Registry entries. Find out the malicious files and entries related to Attentive Antivirus Virus and then delete all.

Attentive Antivirus Virus is a new type of rogue program aims to swindle computer users’ money away. It is promoted via spam e-mails, malicious or hacked Web pages, peer-to-peer networks. Moreover, this virus is spread widely through file sharing sites and also through SPAM emails containing attachments that install the attack once opened. The hackers can easily hide it in download links, and this is why they like to target the file download sites, as they know the visitors there are less likely to inspect links prior to clicking on them to retrieve the download.

Getting a rogue program inside the computer must be an annoying and frustrating thing for computer users. The virus begins its attack by modifying system settings, dropping malicious files and adding registry entries without your knowledge. Thus, it can help the malware to run each time you start Windows. Attentive Antivirus program won’t give you any options to stop the bogus scan and it will do everything it can to convince you into purchasing the registration key for this rogue program. We kindly suggest users to ignore whatever this fake antivirus shows on the screen and uninstall Attentive Antivirus Virus manually as soon as possible.