XP Protection 2013 is defined as a harmful rogue program that may seem to be a common antivirus program, but actually it can only detect infections you don’t have and mislead victims to pay for a full version of the scam. This kind of application is created by computer hackers in order to bring chaos on different computer systems. Thus, it has another name called Vista Protection 2013 or Win7 Protection 2013 depending on different operating systems. This infection is promoted through hacked sites that use exploits to install this program onto your computer without your permission.

The interface of this fake program looks just like real anti-virus software, which is totally designed to trick unwary users into purchasing its whole version of the rogue program. It pops up on your computer automatically and pretends to scan your computer thoroughly. After scanned, it claims that your computer is at great risk and you need to activate its licensed version in order to gain a clean computer. But in reality, it will never protect you from cyber threats, or has the ability to for detect viruses from your PC, it is just a big threat and may cause irrevocable damage to your system. To convince unwary users into believing their computers are messed up, XP Protection 2013 blocks all the legitimate programs installed on your PC. No matter what programs you attempt to run, it gives you an alert saying that ‘XP Protection 2013 has blocked a program from accessing the Internet‘. Besides, you will get slow system performance and poor Internet connection and other annoying problems as well. To sum up, XP Protection 2013 is an evil rogue program that needs to be removed from your machine immediately upon detection.

A. XP Protection 2013 will start a bogus scan that naturally generates many false results in an effort to panic the user into paying for its worthless software. 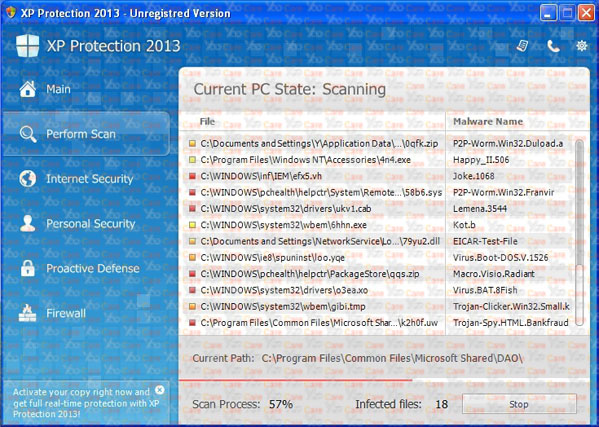 B.  It can display lots of misleading popup alert messages and fake system scan results to scare users and push them to buying its useless software. 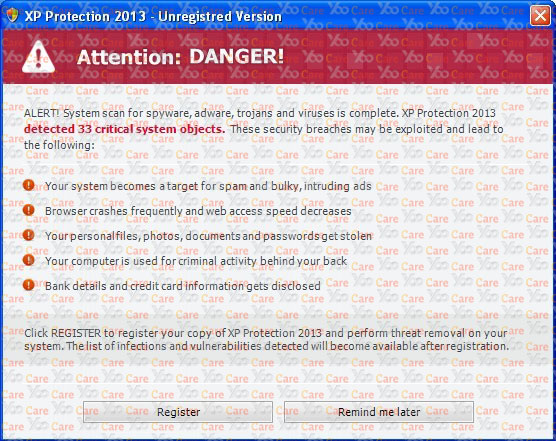 C. This virus protects itself from deletion by blocking all important security related programs. If you run a program installed on your PC, you will get XP Protection 2013 Alert saying as the following picture shows: 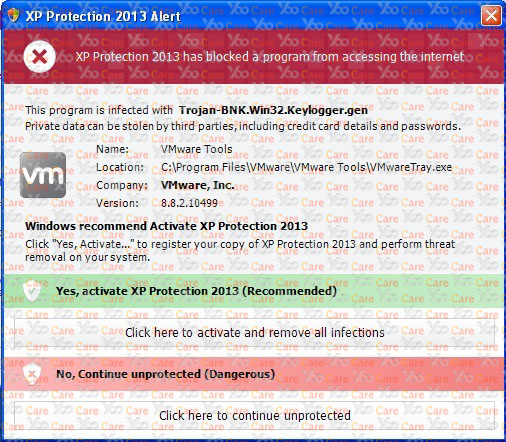 In conclusion: Attempts to purchase this rogue program will only give your financial information into criminal possession. Users should remove XP Protection 2013 virus manually and completely.

Symptoms to Tell Your Computer has been Infected By A Rogue Program:

Although this tricky virus can escape the scan of legitimate antivirus program, it also can be picked up by its symptoms.
1. Your computer will be much slower than before just like crawl which makes you really upset.
2. Some malware you never saw before will be downloaded automatically after you turned your computer on.
3. You can find that your computer resources are highly consumed.
4. You will be kicked off the needed website quickly and then receive its pop up immediately.
5. Sometimes you may find that your keyboard likes dead because you can’t do anything on it.
6. In your system, you can receive some random files with a long name. However, these files don’t belong to you.

The rogue program is a very dangerous infection to your computer as it can degrade your system performance and disconnect your It can automatically install itself in your computer and pops up a scan on the screen, which performs the same way as licensed anti-virus software. Apart from damaging your computer gradually, it cheats you into paying for its product to clean your computer. However, this rogue program is a malicious virus itself which is impossible to help you regain a clean computer environment. Furthermore, the anti-virus program can be blocked by this fake virus, and it loses its function to handle with the tricky rogue program successfully. Therefore, manual removal is highly appreciated. To get a clean and safe computer soon, please consult PC professionals online to help you eliminate the fake program infection completely.

%LocalAppData%\.exe
%Temp%\
%AppData%\Roaming\Microsoft\Windows\Templates\
4. Search for all related registry entries infected by Win Security System virus and wipe them out:

XP Protection 2013 is classified as Rogue Anti-Spyware that gets inside your system with a help of Trojans. As most rogues of this type, it might be distributed using infected websites. It is one of the most dangerous programs on the Internet, it will block all your security programs and hack your system completely. Once it is installed to your computer, you will get the fake message that “Internet Explorer.exe” is infected when you try to go online, this virus can even stop you from running any .exe process.  Also this fake antivirus program will create fake warnings to scare the victims, many victims will pay a fine to this virus because they are afraid of being infected. However, their computers will face to a more terrible situation after they activate this fake program, those PCs can be much slower than before, sometimes their PCs can even crash. To sum up, this program cannot protect your computer at all. Instead, it is created by the virus makers to collect money and data on the infected computers. Considering it is a dangerous threat, users should uninstall XP Protection 2013 as soon as possible.

Friendly Reminder:If you are afraid of making mistake during the manual removal, please contact YooCare: PC experts 24/7 online who will offer you the most effective tech support to remove XP Protection 2013 alert completely and make sure you won’t lose any data during the removal.