Can’t uninstall/remove Securebit Technologies Free Antivirus 3.3 from your computer? Is it a reliable antivirus program or just a fake program designed to rip you off? From the following post, you can get more information about this virus scam and find a best way to get it removed instantly.

Securebit Technologies Free Antivirus 3.3 Is A Rogue Program That Should Be Removed Immediately:

Rogue antivirus programs are an increasingly common online threat that is duping users all over the world to part with their hard-earned cash. And Securebit Technologies Free Antivirus 3.3 is one of the rogue programs that was published a few hours ago. This virus sometimes comes from malicious sources on the internet where it could be downloaded and installed without the PC user’s knowledge or consent. Just like Internet Security Virus, it attempts to make itself like a legitimate security tool which can detect and remove multiple threats on your computer, but you can be sure that none of them will do you any real harm because it is just a hoax designed to promote its useless product and extort your money.

This virus is tricky. It often displays pop-up messages telling users that their machines have been infected. This may cause panic among users, pressuring them to purchase rogue antivirus applications in the hope of resolving the issue. Users, however, should never purchase antivirus software from unknown sources. While Securebit Technologies Free Antivirus 3.3 is running, it will pretend to be the best antivirus program available to the user. It performs a bogus computer scan and creates fake malware results to intimidate its victims into believing there are many infections in the computer. And then it offers its victims the so-called licensed version which claims can help you fix detected malware threats and other PC problems. However, once the payment is made the user finds out that it was just a scam. This virus also has the ability to protect itself from deletion by blocking all important security related programs. Therefore, in order to remove Securebit Technologies Free Antivirus 3.3 completely, it is suggested users to follow the manual removal guide below quickly before the virus has destroyed your whole computer.

a. The program often has an icon in the notification area of the operating system desktop and constantly display pop-up messages alerting the user about fake security issues such as virus infections or unable to clean all files. These pop-up windows only disappear once the user has purchased the product and the non-existent threats have supposedly been removed from the compromised computer. 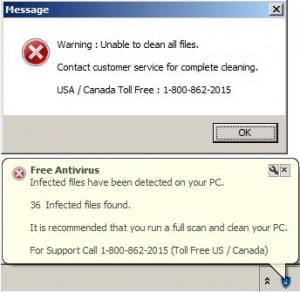 b. After being infected, your computer will be bombarded with numerous fake security warnings or errors.  Besides, this fake application uses a potent combination of misleading attacks against your PC to encourage you to spend money on a fake ‘full’ version of its software. To make it seem to be real, it even provides its number to the victims and asks them if they want to get the license code, they can call 1-800-862-2015 for 24/7 virus removal helpline. Eventually, it will ask you to pay $49.99 for registeri0ng or paying this scam which may let you lose your money. c. Once your computer has this threat, your computer will experience malfunctioning programs and applications, web browser hijacks and pop-up alerts like the following one saying that Windows has stopped working: 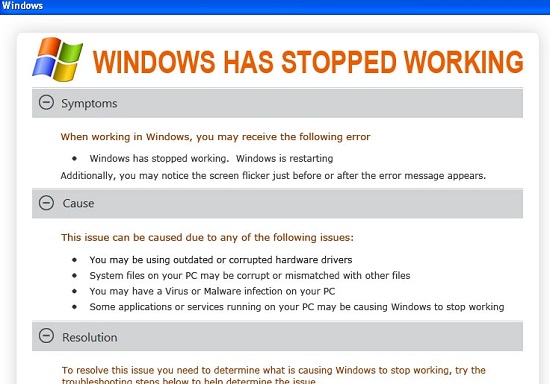 d. From the appearance we can know this rogue program is well-designed, it scans your computer just like a real PC cleaner but that’s only what the whole process looks like. In fact, the scan does not reveal any true facts about how your system is functioning for the moment and whether or not it has spyware on board. 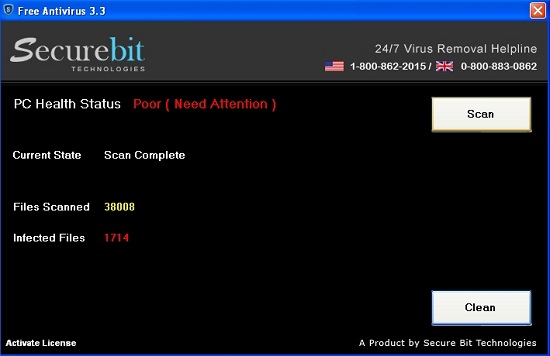 In summary: This rogue program will try its best to convince you it is a helpful software and ask you to activate for its full version which is without any virus detection or removal feature. Thus, for no reason should you trust Securebit Technologies Free Antivirus 3.3 because it is a big scam.

We kindly remind you that system restore is not a wise choice to remove such rogue program. Many computer users found that after they did a system restore, things are going to be worse. Not only did the computers freeze, but also lose their precious data. Furthermore, the virus may be still in the computer and made chaos secretly. Hence, it is recommended that using the manual approach below to get rid of Securebit Technologies Free Antivirus 3.3 virus as soon as possible.

Everyday many bogus antivirus and security applications are released and pushed to unsuspecting users through various delivery channels. Users can easily get Securebit Technologies Free Antivirus 3.3 if they have ever clicked malicious code or distributed unsafe advertising pop-ups, visited pornographic website or downloaded attachment from spam emails. As soon as the virus gets inside, it will be configured to start whenever Windows boots up. This is not a helpful tool, instead, it misrepresents the security status of a computer and attempts to convince the user to purchase software in order to remove non-existent malware or security risks from the computer. Hence, it is strongly recommended users to uninstall this rogue program without any hesitation.

Special Tips: Still stuck with the rogue thing? To avoid messing up your computer by yourself, please Live chat with YooCare experts 24/7 online in time to completely remove Securebit Technologies Free Antivirus 3.3 Virus to save your computer.