Found an automatic pop-up security scan from Antivirus Security 2013 on your screen after you launch system? Can I keep it as a normal security protection? Or is it just a fake anti-virus software? How to effectively uninstall the fake anti-spyware from your computer? Benefit yourself from this post and remove the rogue program safely with following instructions.

Antivirus Security 2013 Virus is identified as a harmful rogue program that is designed by cyber criminals to target unwary PC users accidentally when they gain access to malicious websites, junk emails or downloading hazardous items from infected web pages carelessly. Cyber scammers have made this fake anti-spyware seems similar to real anti-virus software, as it pretends to scan your computer thoroughly and displays a pop-up scan report telling that many dangerous items found in your system which are required to remove immediately via its suggested full version of program. Another similar fake anti-spyware as AVASoft Antivirus Professional also damages the victimized computer terribly. Such a fake program comes bundled with many other types of computer threats, such as malware and spyware, trying to invade your computer deeply. What’s worse? The rogue program allows cyber scammers to gain access to your computer without your permission remotely in purposes of compromising your security and performing illegal activities aggressively. To avoid any further damage, you’d better take action to remove the fake anti-spyware from your computer completely at a quick time.

Tricky as Antivirus Security 2013 fake infection is, it has been encountered many users’ computers to corrupt their computers and fool unknown PC victims to purchase its whole version of program to clean their computers. Many PC users are worried about their computer situations and stuck in a never easily, as a result, they pay money for activating/using its supposed registered editor of product to regain a clean computer. Once paid, you just find that your money is gone and the victimized computer gets damaged terribly. Actually, the rogue program is nothing useful but a malicious virus itself which is unable to help you clean your computer. Furthermore, the fake program can degrade your system performance and disconnect your Internet frequently. If you leave the rogue program in your system too long, you may come across unexpected damages such as system crash and computer freezing. Unfortunately, your advanced security protection may not help you remove the rogue program entirely as it is blocked to take effective as well. In this case, manual removal is a better way to deal with the fake software. 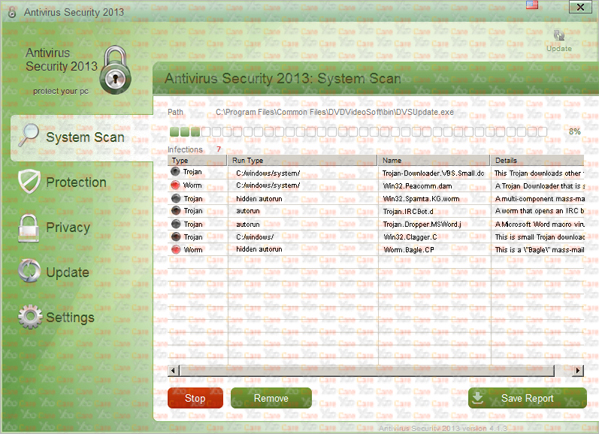 Antivirus Security 2013 is a tricky and harmful rogue program which is used by cyber hackers to target your computer for violating your privacy and compromising your security. It can automatically install itself in your computer and pops up a scan on the screen, which performs the same way as licensed anti-virus software. Apart from tricking you into purchasing the rogue program, the fake anti-virus software may damage your system and normal programs terribly. Once corrupted, your system performs slowly and your executable programs function poorly, particularly the security protection. It can be blocked by this fake virus, and it loses its function to handle with the tricky rogue program successfully. It may take much time and money to fix your PC in Local PC stores or call PC technician at door. In fact, manual removal with PC professionals is considered to be the most effective way to remove the fake anti-spyware entirely.

4. Search for all related registry entries infected by Antivirus Security 2013 virus and wipe them out:

In summary: As the above mentioned, we learn that Antivirus Security 2013 virus becomes a great threat to users’ computers from worldwide. It is totally a fake anti-virus program created by the virus maker. This fake program is cheated by cyber scammers to act as real anti-virus software. When it is installed to your computer, it will start to work and make damages to your system, such as creating the non-existent infections like Trojans and even System Bugs to cheat and scare you. Please do not be fooled by this tricky virus, what it wants to do is to cheat you money, never pay the money and activate it. Actually, the rogue program is totally fraudulent, and it is a virus itself only to threaten you to buy its full product for a clean computer. Furthermore, the rogue program affects functions of your programs terribly, for instance, it may block your anti-virus software to stop it from functioning normally. Since your security software loses its function to delete the virus entirely, manual removal is highly appreciated. Manual removal is a complex and risky process, so please contact YooCare PC experts 24/7 online to help you remove the fake virus from your computer completely.