XP Internet Security Pro 2013 is a rogue program which pretends itself to be a legitimate software helping you solve your computer problems. But in reality, it belongs to a malicious virus which can pop up lots of fake alerts and then trick users. If you detect it on your computer, please don’t hesitate to delete it because all it will do is to ruin your computer instead of protecting it.

XP Internet Security Pro 2013 – Unregistered Version is coming up without my permission. What is that?

Once access the infected PC, it imitates performing a bogus system scan on your system. It warns that your computer is at high risk and then displays a list of threats such as Trojans, Worms that are supposedly damaging system. If you attempts to remove those threats, you will be redirected to the payment website which asks you to pay for XP Internet Security Pro 2013 full version. But smart users should not fall into this hoax. In fact this program cannot detect anything, so you can easily ignore the results of this scanner. It only wants to trick you and swindle your money away. It only mimics performing system scan and later displays a list of random files claiming that they are badly damaging your machine. By using this scare tactics, hackers can easily get money from the innocent victims. When this rogue program is installed, it disables many functions and services on your computer. For example, it stops you from running all the exe. files which means you will not be allowed to launch your real antivirus or even open browser to surf online after being infected. When this fake antispyware begins to scan your PC, it even prevents you from stopping it. As mentioned above, we can see how nasty this virus works. Although it always tries to convince users that it’s a great program, you still can’t trust it. It is definitely a scam and it must be removed as soon as you detect it on your system.

Screenshot of this rogue program:

Beware that this program is far from legitimate. It is a scam targeting your wallet. This damaging program is extremely destructive so that you should remove it without any hesitation. 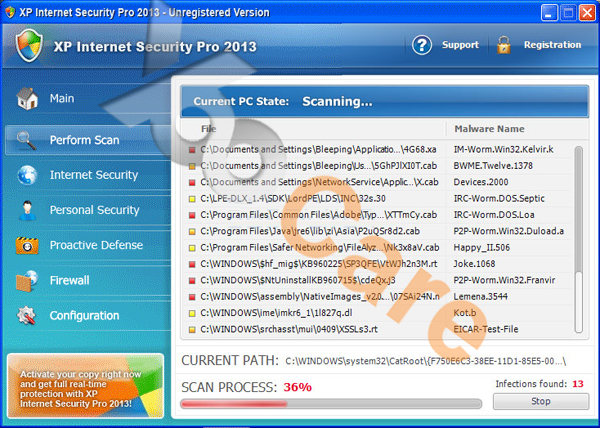 Crash your system or disable your internet.
Install other trojan or spyware on your computer.
Antivirus program is not working.
Allow the hacker to access your entire system.
Important information will be sent to remote server.

No. We kindly remind you that system restore is not a wise choice to remove this rogue program. Many computer users found that after they did a system restore, things are going to be worse. Not only did the computers freeze, but also lose their precious data. Furthermore, the virus may be still in the computer and made chaos secretly. Hence, it is recommended that using the manual approach below to remove this nasty virus as soon as possible.

Still can’t remove this fake antivirus program? Live chat with YooCare experts now to save your computer and remove the virus safely and completely.