How to Remove Fake XP Antivirus Plus 2013 Alert Completely

XP Antivirus Plus 2013 Virus is defined as a malicious fake anti-spyware that encounters many users’ computers during improper tasks online. This fake virus spreads through network, and it invades Windows XP users’ computer during their improper online activities. Usually, the fake virus can install automatically in your computer once encountered. Other fake anti-virus software as Vista Antivirus Plus 2013 targets Windows Vista users’ computers and it performs hazardous activities on the affected computers. Once infected, you will get this fake pop-up alert on the screen every time you launch the system. After that, it appears to scan your computer immediately, which acts as licensed anti-virus software. On the scan result page, it indicates that your computer is at great risk containing many virus infected items. As a matter of fact, all warning scan results are totally false information that tricks unwary users to purchase its product. Obviously, if you activate this trail rogue program, aiming at cleaning your computer soon, you will be asked to purchase its registered version. However, the fake anti-virus software is a virus itself, any version of its products won’t help victims to clean the computer entirely. Never trust such a fake program or pay for it. Instead, take actions to remove the fake anti-virus software entirely as soon as possible.

Generally speaking, the XP Antivirus Plus 2013 enables cyber scammers to visit the affected computer remotely without any permission in the purpose of steal your precious information. Also, the rogue program infects your computer together with many other potential threats like malware and spyware. With such a rogue program, you will get stuck when surfing the web, watching online videos and playing games and so forth. Furthermore, the fake antivirus software blocks the normal programs to prevent them from functioning, particularly the anti-virus software. Since the anti-virus program can’t function well to delete the virus entirely, you need to uninstall the virus manually and entirely at a rapid time. 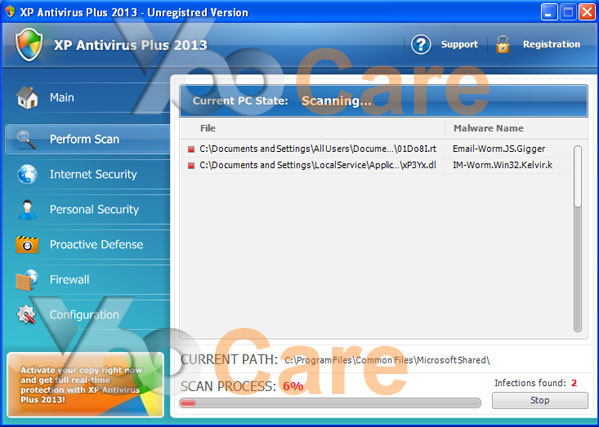 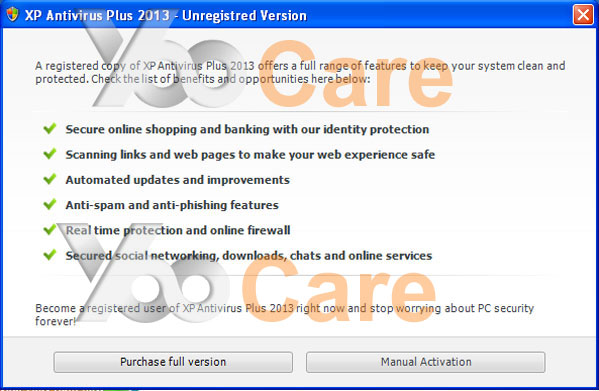 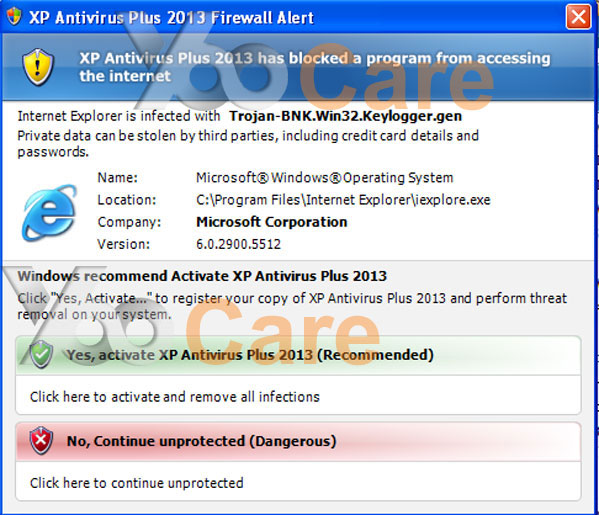 Symptoms to Tell Your Computer has been Infected by XP, Vista or Win 7 Antivirus Plus 2013 virus.

The rogue program takes every chance to install itself in victims’ computers when they accesses to malicious websites, spam emails or other harmful web attachments unwarily. Before deciding to purchase any so-called registered version of this fake program, please taking some further investigation thoroughly, and you will find it illegitimate and functionless. The fake virus can trigger great damages on the affected computer, which makes victims so worried about their computer situation. However urgent the pop-up scan alert seems, don’t trust the rogue program or purchase any so-called version. Furthermore, the anti-virus program loses its functions to handle with the tricky rogue program successfully, manual removal is considered to be the best and easiest way to uninstall the rogue program completely. But if you want to remove the virus manually yourself, please make sure that you’ve got sufficient skills to handle with the rogue thing safely. Or any mistake may make the computer crashed unexpectedly. Thus, please consult PC professionals online specifically before taking any further step.

2. Press Ctrl+Alt+Del keys together and stop XP Antivirus Plus 2013 virus processes in the Windows Task Manager.

4. Search for all related registry entries infected by XP Antivirus Plus 2013 virus and wipe them out:

In conclusion: As the above mentioned, we can learn that XP Antivirus Plus 2013 virus is a great threat to Windows XP users’ computer as the fake virus can install and update itself automatically aiming at invading your computer deeply and aggressively. Other fake programs, for instance Vista Antivirus Pro 2013, is also designed by cyber hackers to violate compromise the security. Actually, all scan results displayed by such a fake program are just error message and false information that tricks your money. Apart from damaging your computer, the fake virus can visit your computer remotely without any consent to gather your precious information. Even if you activate the registered version of the rogue program and purchase it, you still won’t be able to get a clean computer for the rogue program is a harmful computer threat itself. Furthermore, the fake virus degrades the computer performance and blocks normal programs to prevent them from using these programs smoothly, particularly the anti-virus software. Since anti-virus software is useless to eliminate the virus, manual removal is highly appreciated. Manual removal is a complex and risky process, so please contact YooCare PC experts 24/7 online to help you uninstall the fake virus from your computer completely.