Win 7 Antivirus Pro 2013 is a is a fake anti-spyware program that uses various misleading tactics to deceive PC users into thinking that their computers are affected by numerous malware threats. And then it attempts to persuade computer users to spend money on bogus software by purchasing a non-existent full version. It is unnecessary for users to hand over their money and pay for this crap. To secure your computer, please follow the guide on this post and remove this threat quickly.

Being as a harmful rogue program, fake Win 7 Antivirus Pro 2013 usually comes along with the download of Trojan and is installed automatically. It pretends to be a genuine security tool, however, it has no capability of defending your computer from any type of computer threats and system issues. The name of this malware can be Vista Antivirus Pro 2013 or XP Antivirus Pro 2013 while in the specific operating system.

Once being successfully installed, it will launch a bogus anti-malware scanner and show false PC scan reports, which state that your computer is infected with various malware threats. While this malware is running, it will display annoying pop-up warning messages which are completely fake and give inaccurate details about certain security issues. In addition, it blocks you from running any programs, even may prevent you from accessing Internet at all. As you can see, this software is a scam that was created to trick you into thinking your computer was severely infected. The criminals just want to bamboozle you into spending money on its full version before you realize that these warnings are fake. Any delay in removing the virus completely will increase more risk of system failure. If your PC is infected by Win 7 Antivirus Pro 2013 virus, it is suggested to manually remove it so that the virus can be totally gone from your PC and it won’t come back to bother your PC again. 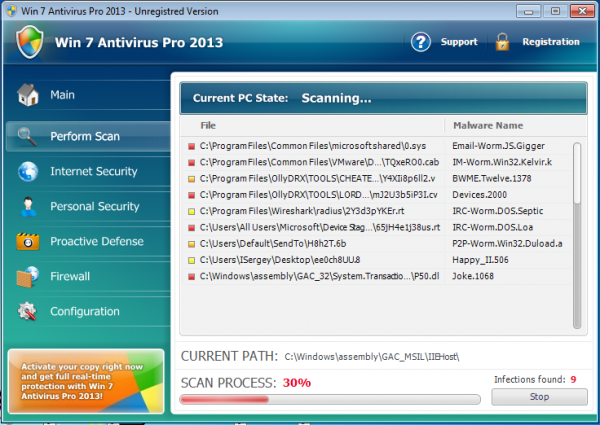 What to do if your computer is infected with this malware?

Tip One: Never pay money for this useless product, it won’t give you any code to remove itself or protect your computer. Instead, you will lose to your money for nothing as a result.

Tip Two: No necessary to try to uninstall this rogue program on the programs list or on Add/Remove Programs. It  doesn’t have a uninstall string, so it cannot be remove traditionally.

Tip Three: You can’t count on antivirus to help you get rid Win 7 Antivirus Pro 2013 virus, since it doesn’t allow you to run any antivirus and executable applications that may assist to remove it.

Tip Four: Restart your computer to “safe mode with networking”, and then try to manually remove all the infected registry entries and files from the following step by step guide.

Win 7 Antivirus Pro 2013 is nothing but a rogue program created by cybercriminals with the only aim to deceive unsuspecting computer users and swindle them out of their money. The appearance of this software may seem to be a legitimate security program, but, in reality, it’s a fraudulent and useless security tool that can destroy your computer. After it is installed, it will shut down your anti-spyware programs immediately and begin its attack. You are getting pestered with pop ups as this threat infects your registry and uses it to launch annoying pop up ads out of nowhere. This malware will also corrupts your registry, leaving your computer totally unsafe. You need to remove this malware as soon as you see its presence since it can’t do anything good to your PC but can cause further harm to your system if it stays a bit longer.