Win 7 Antivirus 2013 is an application that scares people actively into thinking that their PC is heavily infected and needs to pay for a specific program in order to cure tens of various non-existent PC parasite. Undoubtedly, it is a hoax designed to extort money from innocent users. There are a lot of similar rogue programs like Win 7 Security 2013 and Win 7 Antispyware 2013 spreading over the Internet. It is suggested users to get rid of this rogue program as soon as possible.

When this fake antivirus program accesses the compromised computer, a disaster will begin to disturb users. Initially, this rogue program will make a fake virus scanner running on your computer every time you turn on your computer. It will show you various infection and advice that registering and paying for the tool may help clean the computer. Besides, it does not allow running your executable. Instead, it displays fake notification warning that computer is at risk until you pay for the so called full version. As you can see, Win 7 Antivirus 2013 is a scam that was created to trick you and swindle your money. The scammer just want to bamboozle you into spending money on its full version before you realize that these warnings are fake. Please do not fall for this trick of cyber criminals. You are strongly recommended to remove this virus as quickly as possible.

Screenshots of this rogue program:

Win 7 Antivirus 2013 infects the computer through websites, emails and fake applications that are infected by various types of dangerous viruses. Once a user accepts this rogue software and allows it to enter the system, it will cause all types of havoc in your system. It will run a bogus scan automatically and show you non-existent errors just as the following pictures show. Users must remove this malware immediately instead of paying for the useless full version. 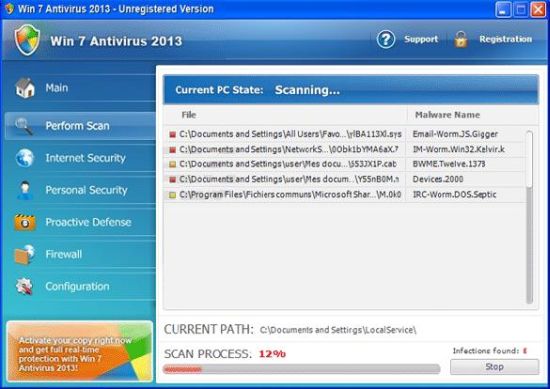 There are so many ways can lead this malware to get inside the computer, but most of the time it is beyond your knowledge.

2> It may be installed through spam email attachments, media downloads and social networks.

Win 7 Antivirus 2013 is a rogue program that is able to block any legitimate security software from running that include legitimate anti-virus and anti-spyware applications. After it is successfully downloaded, it executes a fictitious computer scan pretending to check your PC for possible computer viruses. It can also perform many bad activities on your computer once downloaded. For example: 1) It generates automatic system scan and fake security report without any permission. 2) It may cause browser redirection or even disable internet access as a result. 3) It blocks task manager and registry editor to prevent users from removing it manually. 4) It disables your current antivirus to avoid the deletion and keeps making chaos on the infected computer. For saving your computer, it is no doubt to remove Win 7 Antivirus 2013 timely.