Do you have any idea of what’s a fake antivirus software and how can it do to you and your computer? Has your computer just been infected with one of the fake programs? Does it look familiar to you? If you want to stop the constant pop up messages which has annoyed you a lot, read here to find more information about it and the solution.

Windows Turnkey Console is one of the latest version of fake antivirus tool which comes from the fake Windows antivirus program family -Rogue.FakeVimes family. Sharing the same purpose with Windows Malware Firewall and Windows Antivirus Rampart, this scam is created and used by online criminals to steal money from vast computer users. It is said to be an Internet crime that has been quite popular in modern society. No matter how legitimate it looks from the appearance, it’s indeed a malicious virus which will bring you a lot of pain.

There are several ways that might cause you to the infection. For instance, you have been redirected to a hacked webpage which allows auto-download of malware and ransomware to be installed in your computer; or you opened a special spam email and let this virus sneak into your computer without your notice. Antivirus programs cannot remove this kind of fake software and some can’t even detect it as it was born in such a fast speed that antivirus tools have not gained the new data of it. When the infection is done, Windows Turnkey Console virus will start a scan automatically and strongly suggest you to buy its full version so that it can completely get rid of those detected viruses and bugs. But do not believe what it tells you. It’s just boasting to you and annoying you by numerous security alerts to finally get you to pay. Once you have made the payment, nothing would happen except you will be losing a bunch of cash. Hence, it is suggested that you should totally ignore it and get it out of your computer in time.

There are some fake security alerts that you may come across on your infected computer. Here are several examples:
Warning
Firewall has blocked a program from accessing the Internet
C:\programs files\Internet Explorer\iexplore.exe
is suspected to have infected your computer. This type of virus intercepts entered data and transmits them to a remote server.
Error
Software without a digital signature detected.
Your system files are at risk. We strongly advise you to activate your protection.
Error
Keylogger activity detected. System information security is at risk.
It is recommended to activate protection and run a full system scan. 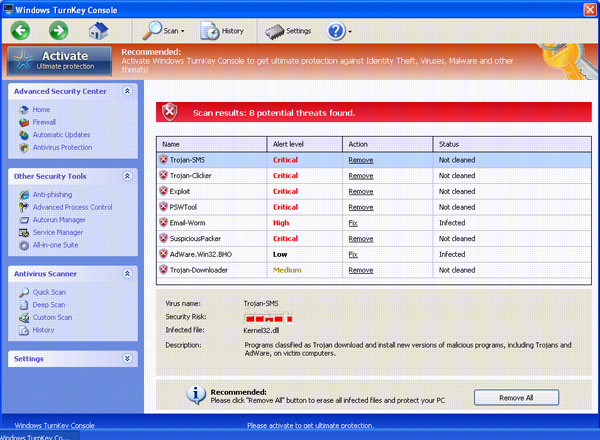 Why is Windows Turnkey Console Fake Antivirus Software So Dangerous?

1. Lots of pop-ups and fake alerts will disturb you when using the computer and may slow down the overall operation;
2. Icons from both desktop and start menu will be hidden from you;
3. Other spywares and viruses will be installed without your permission;
5. Personal information is in high risk to be stolen by cyber criminals;
6. Significant files and system data will lose which could lead to system crash.

As mentioned before that legitimate antivirus programs cannot 100% remove this virus, you will need to do the removal manually. A system backup is suggested if you don’t want any critical files and data to be messed up. Then Follow the steps below to start right away: 2. Press Ctrl+Alt+Del at the same time or right click on the Task Bar to open the Windows Task Manager;

Tips: It is strongly recommended to remove Windows Turnkey Console with expertise, because any mistake due to lacking of computer knowledge could lead to more damages till system goes crash down. So please contact YooCare, expert in taking care of users’ computers for a fast and professional help.