Is your computer blocked by PRS for Music (Metropolitan Police) Virus when you are listening to music on Facebook? Have you been required to pay a 50 pounds to unlock? Don’t take any fast action. You’d better remove this fake program out of your computer as soon as possible.

PRS for Music also known as PRS for Music (Metropolitan Police), is a malicious ransomware that uses the trademark and logo of PRS (Performing Right Society organization) for conducting Internet crimes. But the organization has lately confirmed that it is not related to this badware and will not take any responsible for the damages. Cyber criminals use the reputation of PRS organization to trick innocent computer users to believe what the fake program says.

When the infection has been done, this ransomware will show itself and run automatically every time you restart the computer as it has already changed the settings. A security message will pop up saying illegal downloaded music pieces (pirated) have been located on your computer, and you have to pay 50 pounds to unlock the computer. Normally, there’s no reason to believe this kind of charged virus protector, but in this case, as PRS for Music Virus has a deceitful appearance and the reputation of the organization which is doing business about copyright of music works, you might easily be caught since you were listening to music when this happened. It says that it has detected through your IP address that you were visiting some illegal websites. So as a penalty, it locks your computer in the name of authority and law and blocks you from accessing to the desktop or Task Manager. However, it is not a wise option to follow what this virus tells you and get the payment done due to nerves. Even if you do this, the money you paid will just be a waste of value and your computer will not be unlocked as you wish it would. The nerves you have should be focused on the removal which must be done as soon as possible. 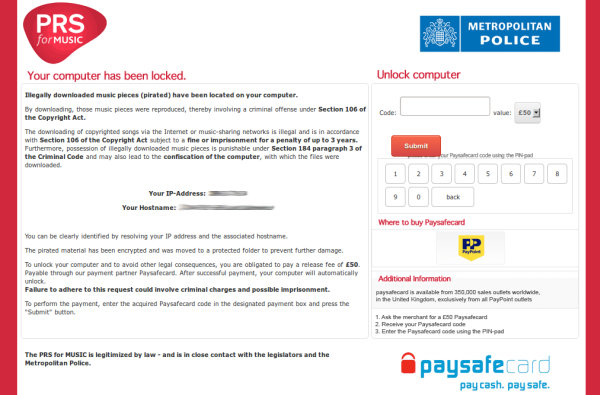 Why an immediate manual removal is needed

1. No antivirus programs can successfully delete PRS for Music as its designers have gained enough knowledge of computer and antivirus software;
2. Safe Mode with Networking would be working sometimes as the control screen also shows up;
3. More viruses and malwares will be installed without your permission;
4. Your personal information will be stolen for criminal usage;
5. System data and files will be relocated or hidden and causes sudden death or crash down.

How to remove PRS for Music Virus

5. Restart again and get into Windows with normal mode.

Notice: As the manual removal requires expertise, so if you have failed to delete the virus by the guide above, please contact YooCare PC experts online for a fast and professional help.