Cyber blocking of computers? Is computer blocked by the West Yorkshire Police Virus? Are you prevented to do anything on your computer and the only thing you can get is a full locked screen saying that your computer has been legally locked due to the illegal activities you have just done? Is there a fine involved if you want to unlock the PC? How to Unlock A PC and Files Locked by West Yorkshire Police Ukash Virus? Do not panic. This is a scam virus which has nothing to do with the real police or government and your computer will be fine when you finish this reading.

West Yorkshire Police Virus is a nasty ransomware that has been quite active and persistent for a long period of time. This deceitful pop up warning message on your computer screen, which claims to be legit and authorized proved, is in fact having nothing to do with the government or police but instead is conducted by cyber criminals to blackmail innocent PC users. It is similar to the Royal Canadian Mounted Police (RCMP) Virus which attacks computer users mostly from Canada. Surveys show that the population of its victims has been increased and the range is expended to more European countries including England, France, Germany, Ireland, Scotland, Netherlands, Spain, Italy ect. We believe the United States is also under the list of targeted country now. Same as the Metropolitan Police Virus, this fake police warning message (also known as the West Yorkshire Police Ukash Virus) plays the same trick as requesting money from victims via locking up their computers and scaring them with illegal issues that they have not done. As most users cannot do anything with their computers at all, this virus always wins the game. People are now warned to not believe this West Yorkshire Police Ukash thing or a single word it says.

With its deceitful appearance, the West Yorkshire Police Virus is like a wolf dressing up like an adorable sheep in order to fool people’s eyes and then make them become its feast. Generally, lots of ordinary computer users cannot distinguish fake from truth and believe this displaying message is from a genius and legit program. There are many ways for one to be infected with this scam as long as you are surfing the Internet incautiously. To be more specific, with the help of Trojans, fake online scanners, hacked webpages, freeware and spam email attachments, this West Yorkshire Police Ukash virus can be widely spread and distributed over different networks so as to reach out to more victims from different locations. Antivirus applications are believed to have failed in preventing such scam program as cyber criminals who created the virus are also qualified with advanced PC skills.

Upon install, the West Yorkshire Police Virus will be able to modify the default structure of the system and make its own program the start-up process. This will help it launch the block message automatically each time the infected computer is started giving you no time to respond. This fake pop up will then accuse you of violating the laws of the country on the Internet because you have watched child porn or distributed banned pornography online. To make it more real, personal information like your IP address, computer OS and host name can be listed on the block page. Then in the name of the country, West Yorkshire Police Ukash will lock up your computer so as to terminate your against-law behaviors. Specific articles will also be elaborated to strengthen the fact that you really have broken the laws. To unlock your computer, West Yorkshire Police Virus will ask for a certain amount of fine, in this case 100 pounds, to be submitted via Ukash or PaySafeCard within the limited time. However, computers will remain being locked even after the fine is entered as required. This is a very popular way of cyber criminals conducting cyber fraud. Therefore, instead of getting scared or paying the requested fine, you should remove this notorious West Yorkshire Police Ukash scam out of your computer immediately.

Can’t remove West Yorkshire Police Virus by yourself? This guide is just for advanced users, if you are not computer wiz, please consult with YooCare experts 24/7 online in time. 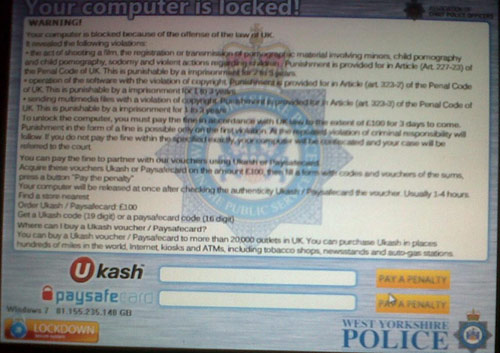 The West Yorkshire Police Virus program is believed to be from the Internet bundling with resources or mediums like malicious web sites, freeware or spam email attachments. It is a ransomware created and controlled by cyber criminals who are qualified with certain levels of computer knowledge and skills. Since almost every single computer has an authentic virus protector, cyber criminals must make this virus quite smart in order to escape from the detection and auto removal by legitimate antivirus programs. That’s why computers with antivirus protections still get infected by this Ukash virus.

Manual removal process, which requires advanced computer knowledge and abilities as well to deal with the virus manually, is suggested here as the most efficient way of unlocking PC from West Yorkshire Police Virus. Due to the changeable characters of virus files and associating registry values, a manual process can guarantee a complete removal of this virus. And expertise will be required during this manual removal process.

1. Reboot your infected computer and keep pressing F8 key on your keyboard to get an Advanced boot options screen where safe mode options are listed for you to pick. Use the arrow keys to highlight “Safe Mode with Networking” and press E/Enter. Usually, this will help temporarily unlock PC from the West Yorkshire Police Virus screen:

2. Press Ctrl+Alt+Del on your keyboard or right click on the bottom Task bar to open the Windows Task Manager; End the process West Yorkshire Police.exe:

3. Find out and delete all the associating files and registry values of this West Yorkshire Police Virus: 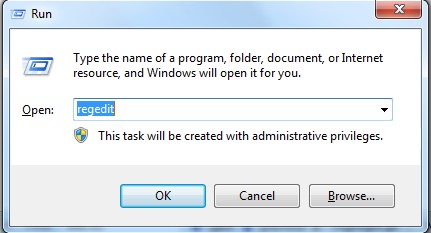 To conclude: The West Yorkshire Police Virus is not a legit or trustworthy blocking message as it’s sponsored by cyber criminals to scam money from innocent computer users especially from the United Kingdom. By accusing you of violating laws on the Internet because of some banned activities you have done and threatening you that further criminal cases can be automatically started against you if you refuse to pay the fine, this Ukash virus can get a lot of innocent PC users to pay and help cyber criminals benefit. It usually turns out that computers will still be blocked even after the fine is entered. Circumstances when PCs are unlocked do exist. However, paying the 100 pounds will not help you get rid of this Ukash virus from the computer. Your computer may be unlocked temporarily. It can be blocked over and over again until this West Yorkshire Police Ukash virus is completely removed.

Note: It is strongly recommended to remove this fake West Yorkshire Police scam program and unlock the files with expertise. Any mistake could lead to unwanted consequences. Please contact YooCare for a fast and professional help: