The Best Apps to Save Your Favorite Podcasting Sections 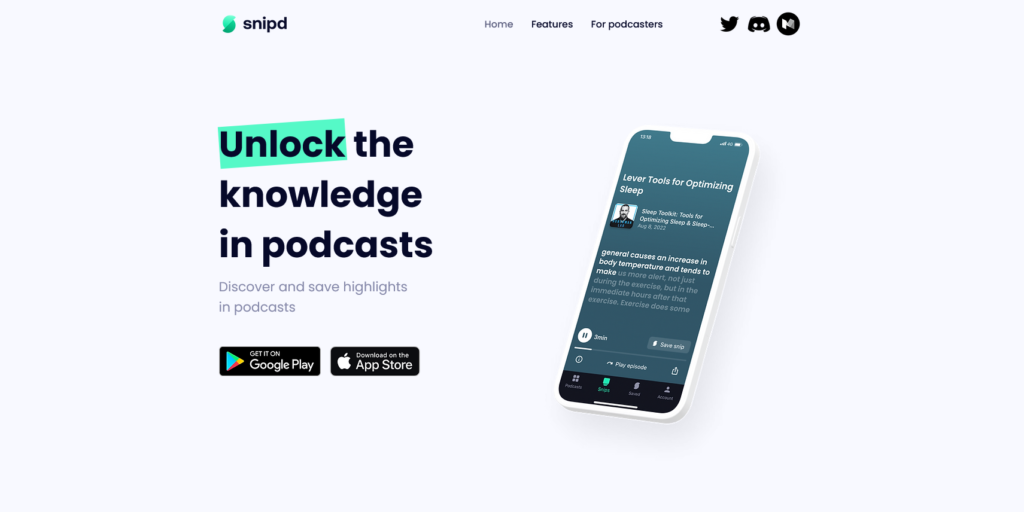 Listening to podcasts also requires collecting highlights to be heard, which app is more suitable?

As the form and content of podcasts become more and more abundant, there are some programs whose information value and density can be compared with articles and videos. For text and images, we will collect them by cutting and taking screenshots; But for a sound-mediated podcast, have you ever had the idea that “if only I could cut this section out separately”?

As a half-podcast enthusiast, I’ve been using Spotify to listen to podcasts, whether it’s device progress synchronization or UI interaction, the basic features of podcasts are basically satisfied; The only regret is that when you hear a wonderful clip, there is no function to crop and collect clips.

Therefore, I started looking for such podcast applications on the market, and the main needs include:

In the market to find a round, there are generally 6 models that can meet the requirements, namely Snipd, Airr, QlipCast, Overcast, Himalaya and Castro. However, among them, Himalaya has the problem of flooding advertising and limited program content, although it has the advantages of complete functions, multi-terminal synchronization and network stability, but individuals do not take into account, and friends who do not mind the above problems can try. As for Castro, its clip interception can only generate local file clips, and to share it, you have to find a place to upload it yourself, in addition, the playback stability seems to be poor, and the program sound will be repeated constantly (I don’t know if it is my case), so it is also excluded.

Therefore, in the following article, I will specifically compare the functions of Snipd, Airr, QlipCast, and Overcast related to the requirements of clip capture and sharing, and refer to readers with similar needs.

The overall style of Snipd is similar to that of Spotify, with the main features being icons with large lines and dark blue gradients and green colors.

The Airr interface is simple and clean, mainly black and white, with only two modules on the first floor: the first is mainly to watch some clips shared by yourself and others; The second block contains podcasts to follow or subscribe to, shows you’ve listened to, and clips you’ve created.

The most recent update to QilpCast was two years ago, and the UI can’t match the first two, which is only satisfactory.

Overcast is a bit like an Apple Podcast, but with a custom theme, menus moved to the top, and other than that, the interaction and style are close to native. The first level of the aforesee layout is the program history, list (customizable), search and playback control, the visible core is still listening to the experience of the program, and does not take fragment sharing as the main function.

This part of the function can be said to be the core of my needs, and I will compare the main operational processes, namely: cropping and creating clips→ managing and editing clips, → sharing or exporting.

Note: Intercepted fragments are called differently in each software, with Snipd calling it Snip, Airr calling it Quote, QlipCast calling it Qlip, and Overcast calling it Clip. For the convenience of reading comprehension, I refer to the following collectively as “fragments”.

Snipd divides the cropping interface into two parts, which is more convenient for intercepting long clips, and supports adding private notes, which means that more records or notes can be made.

Airr’s interaction is similar to the cropping action that comes with iOS albums: first swipe left and right through the above timeline to adjust the position, and then pull the crop box to adjust the crop length left and right, one box corresponds to 1 second. But there is a small inconvenience: when the progress bar is at the starting point, it is difficult to accurately locate the left end of the crop box to the desired position, and it is more convenient to first drag the progress bar back a little.

Overcast’s timeline start can only be moved up to 1 minute forward (e.g. now at 3:16 click Share Clip, inside the starting point is up to 2:16), and the interception length is up to 90 seconds, of the four apps, only Overcast can’t name the clip.

The design of Qilpcast is similar to Airr and Overcast, but the overall is less likely to be mistouched.

Judging from the format in which the fragment is generated, Snipd and Overcast can generate local video files (essentially audio plus cover) in addition to generating public links.

For created clips, there are generally two ways to display the position: one is displayed under the corresponding program, and the other is displayed in a separate functional module.

Snipd and Airr are displayed in both of these locations, especially Snipd in the Unified Management module, which also allows the creation of collection classifications based on custom themes.

In contrast, QlipCast behaves modestly: in the playback interface, there is no way to know exactly how many clips were created and whether there were overlaps between them. In your profile, clips are also displayed in isolation and are not grouped according to the source program.

However, QlipCast also has an exclusive advantage: it supports so-called bookmarks in the player, which allows us to rummage forward from the marked point in time and complete the interception. The advantage of this is that in many cases, we will form the idea of “this wonderful” after listening to a paragraph, and we want to edit it; Intercepting forward increases some convenience.

Overcast, on the other hand, is more rudimentary, as if it completes its mission after creating a fragment, and is even more unmanageable without a standalone module that can view the clip clipping record. So if you want to organize the fragments created by Overcast, you need to combine some external applications.

Finally, judging from the ability to edit in post, Snipd and Airr can still edit the title text and length multiple times after creating the clip, while QlipCast and Overcast can no longer edit it.

When I encounter interesting snippets, I will also share them with my friends. At this time, whether the other party can open smoothly on various devices is also an important issue. Otherwise, the function of sparking discussion from sharing is lost.

In terms of sharing related features, QlipCast can record the number of times it has been played and liked after sharing; As mentioned earlier, Snipd and Overcast can generate local videos with cover and spectrum animations when sharing.

On the other hand, for podcasts to also be a source of knowledge gathering, fragments need to be exported to an external knowledge base or documentation software for further collation. In this regard, Snipd is the most versatile, not only for instant synchronization of accounts associated with Readwise and Notion, but also for exporting to Obsidian, Logseq, Bear and Markdown format files.

Take the association of Notion as an example, first log in to the Notion account authorization, and then let you select a Notion page or database, where you need to select at least one page containing a database (there can be other text content):

The total table of the synchronized database is based on the program as the record unit, and when clicked, the content under the program will appear in the subpage. According to the test, the content and completeness of synchronization are no problem; It’s just that if the video is generated, the database keeps all the online links.

Airr also has an export function, but currently only supports Readwise, and since I don’t use it, I won’t show the specific steps here.

Overcast can only export manifests in OPML format, and it does not natively support fragment titles and notes, so if you want to complete the management, you need to go through the following manual steps: generate a link or local audio → copy and paste to the knowledge base → select the right category and tag→ write down the title or content record → back to Overcast, compared to the above Snipd fully automatic synchronization, obviously a lot of trouble.

Smooth playback is a prerequisite for a good listening experience. In this regard, the results of my tests were QlipCast> Snipd> Airr and Overcast.

Among them, all the functions of QlipCast are basically smooth to use, while Airr and Overcast include loading audio content online and are not smooth (but download and listen to it is slightly better). Also, if the network is not good, Airr can’t create clips, and Overcast doesn’t have this problem. As mentioned above, the share link generated by Overcast doesn’t open smoothly.

Snipd’s performance is not very stable, mainly when it is not smooth, mainly can not access the account data and podcast program list, can not create clip clips, but the podcast is already listening, can be loaded and switched normally.

In summary, I think Snipd is the best choice when it comes to creating and sharing clips. If you don’t mind the problem of network stability, Airr is not inferior in other aspects, and it is relatively simple and clean in design and interaction, but it seems that the future is uncertain, and from the official website, it is ready to transform into an ESPN event-specific cropping and sharing application. Although QlipCast is the smoothest to access, after all, the last update was two years ago, and it does not support export, so it is carefully selected from the perspective of data security. Finally, if you don’t mind putting up with ads and content moderation, consider the Himalaya mentioned at the beginning.